LowKickMMA.com
Home Boxing News Jake Paul Was Shocked Floyd Mayweather Got So Mad About His Hat 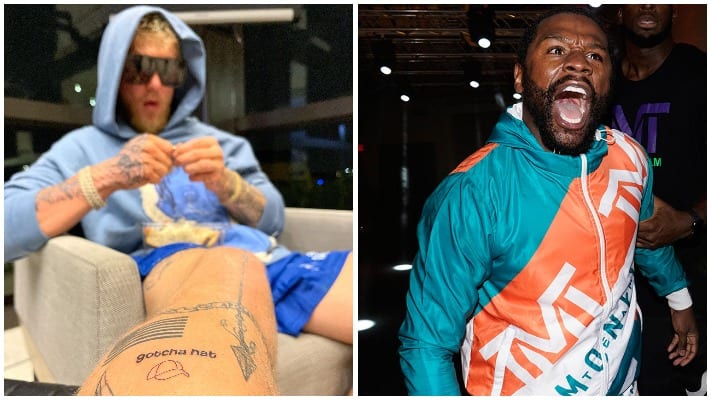 Jake Paul didn’t expect a brawl to break out when he stole Floyd Mayweather’s hat.

“I didn’t think he was gonna get that mad over a hat,” Paul said in an interview with Chael Sonnen.

The YouTuber was in attendance when his brother, Logan Paul, squared off against Mayweather for the first time ahead of their Showtime pay-per-view fight on June 6.

Jake Paul and ‘Money’ began talking about a future fight. Amid the back-and-forth, Paul plucked Mayweather’s hat from his head and tried to run away. Unfortunately, for the 24-year-old he didn’t get away and a brawl broke out.

READ MORE:  December Is A Big Month For Boxing

“It was sort of sensory overload with everything that was going on,” Paul said. “There was like eight guys around me, all grabbing me, some hitting me in the leg. I’m holding onto (Mayweather’s) hat; I was holding onto his hat for dear life. I was like, ‘No! I’m not letting go!’ That was the main thing that they were concerned about. They were like, ‘Give us the f*cking hat! Give the hat!’ And I was like, ‘Nooooooo!’ And then finally they got the hat. And then, yeah, I just see this angry Floyd Mayweather. I couldn’t believe it. One of his security guards had my shirt wrapped around his hand, and so I couldn’t get away. He just comes running at me, and he’s throwing punches over the security guard, and I’m literally just like, ‘Oh, wow, this is crazy.’ The funny thing about it was that none of the punches were even coming close to me, and he actually punched his own security guard in the side of the head. But, yeah, (it was an) absurd moment, hilarious.”

Paul explained how he imagined stealing Mayweather’s hat would play out.

“Hey, it’s show business,” Paul said. “I didn’t think it was gonna go that viral. I thought it was gonna be like, ‘This is funny, Jake Paul is an immature little kid’ – which, by the way, that’s what I was going for.

“I was (thinking) this is gonna be hilarious. I’m gonna be like a little kid stealing someone’s hat on the playground.” (Transcribed by MMA Junkie)

Do you think Floyd Mayweather overreacted to Jake Paul stealing his hat?

December Is A Big Month For Boxing