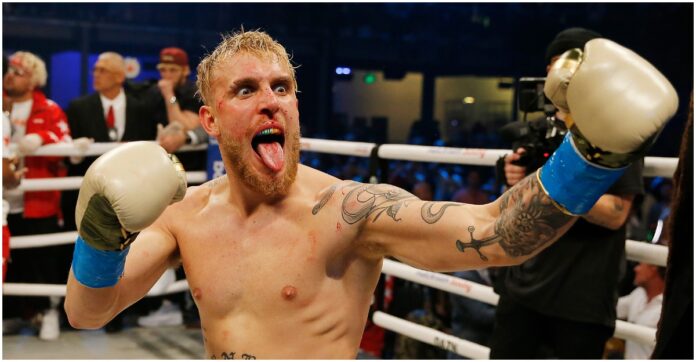 Jake Paul continues to take the boxing world by storm, and the YouTube sensation has revealed a shortlist of who could be next for him between the ropes.

In his most recent outing, Jake Paul dismantled former UFC welterweight champion, Tyron Woodley in spectacular fashion. The anticipation pursues to grow on who Paul will face next. Several notable names have been thrown in that hat, but nothing is locked in as of yet.

In a recent interview with Teddy Atlas, Jake Paul shortlisted six potential opponents that are on his radar for the next bout.

“Floyd Mayweather, Oscar De La Hoya, Anderson Silva, Michael Bisping, Tommy Fury or Sonny-Bill Williams out of Australia. There’s a lot of people on the hit-list and some other names that we’re talking to. Just trying to pick the biggest opponent.

“Everyone I’ve fought I’ve carried the promotion, nobody has matched my star power so I’m looking for someone who can match my star power – we might fight in Australia, America or the UAE.”

Despite boxing being Paul’s chosen craft, the 25-year-old is banking on himself to transition to mixed martial arts. ‘The Problem Child’ believes UFC President Dana White would be open to having him compete under the UFC banner. White and Paul have had previous back and forths, but the UFC boss is not stupid when it comes to intelligent business. It’s a move that the organisation could very well gain from.

Paul Eager on Transitioning to MMA

“I think it’s timing and proving myself more in the boxing side of things, and pretty soon the UFC and the MMA side, it’ll be undeniable for me to get into the Octagon, or fight for one of these other organizations against a big name. So I think it’s all a timing thing and Dana [White] seems to be open to it. Right,” Paul said on Teddy Atlas’ podcast.

“He said on my brother’s podcast he might let Logan fight in the UFC and I think he’s coming around to me and starting to see what I’m about and what I actually stand for. Obviously, he doesn’t like me harping on the fighter pay side of things and sort of harming his business, and being a shareholder in Endeavor and pushing on the investment side of things. There’s definitely a feud there, so we’ll see what happens.”

With White open to having one Paul brother in Logan try his luck among the best mixed martial artists in the world, there’s no reason to suggest why White would decline Jake’s interest in competing in the UFC. The Paul brothers have made a name for themselves through hard work, dedication and the skill of promotion. Whatever the pair set their mind to, both seem to accomplish the goal.

Paul’s last three wins have come against former MMA champions Ben Askren and Tyron Woodley, and he does have an extensive background in Wrestling. It would be a case of perfecting the craft and mixing the ability to strike and wrestle in the Octagon. A whole different ball game, but one Paul feels confident he would succeed in.

The Cleveland born sits at (5-0) in his boxing career, with four of those victories becoming viral knockouts. Every outing, Paul finds himself against progressively better opposition, which is smart for his development and growth as a fighter. Still, with success comes critics. Many don’t hold Paul’s skill-set in high regard due to continuing to fight undersized athletes who aren’t professional boxers.