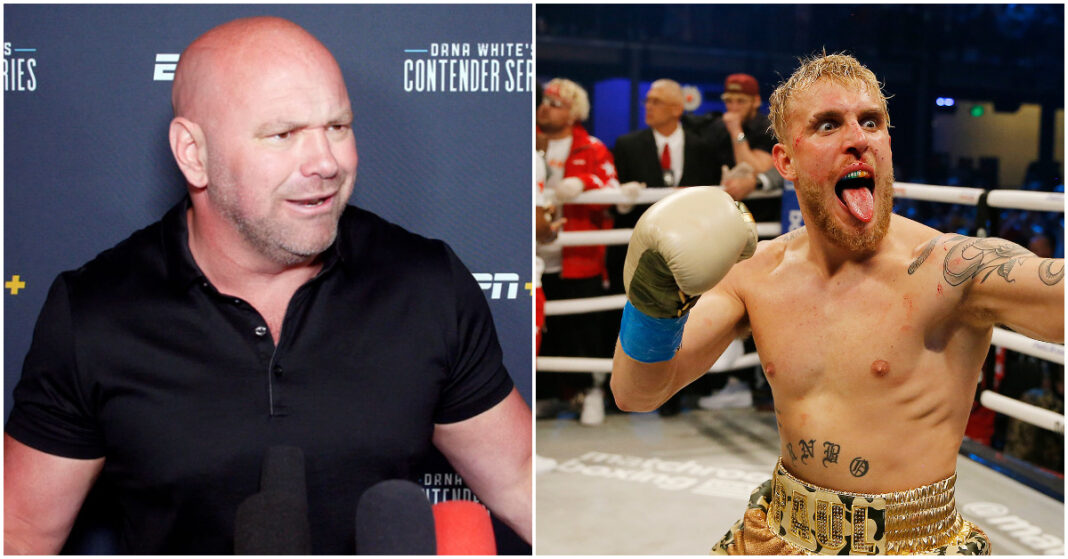 The ongoing back and forth on social media between Jake Paul and Dana White is being put to rest once and for all, at least according to the UFC President.

White set the record straight in an appearance on the Full Send Podcast that was released Thursday, ensuring fans that this would be the last time you’d be hearing him talk about Paul.

“I put out the challenge, he said, ‘You do coke,’ I said, ‘I think you use performance-enhancing drugs. Let’s do it.’ He never responded to it, so fire away, kid. Do your thing.”

“I’m arguing with this kid that doesn’t fight for me and is never gonna fight for me, so what’s the point of he and I going back and forth with each other?” (Transcribed by MMA News)

One of the biggest MMA stories in the year 2021 was a feud caused by the constant war of words between Paul and White. Many words were exchanged including White saying that Amanda Nunes would leave Paul in a coma after the YouTuber claimed Nunes had no star power.

The Origins Of Dana White’s Beef With Jake Paul

White began to express his issues with what the Paul brothers were doing in the sport of boxing after it was announced that Logan Paul would be taking on Floyd Mayweather. However, it wasn’t until Jake took on Ben Askren that the fireworks really started to fly.

White jokingly claimed he would be willing to bet one million dollars that Paul would lose the fight and had a handshake agreement for the bet with Snoop Dogg. After Paul knocked Askren out, Snoop Dogg called out White demanding that he pay up but the boss claimed he never made the bet and was just speaking tongue-in-cheek.

Paul then fought former UFC champion Tyron Woodley which led to more drama between the two. White figuratively bet against Paul and lost again and this time Paul responded by claiming he had embarrassed White’s entire organization.

Of course, the underlying factor to this war of words has always been the subject of UFC fighter pay. The most recent and seemingly final battle between the two came when White issued a unique challenge to Paul and was met with a checklist of orders in return.

Do you think Dana White is seriously done with the beef or will we see more drama between him and Paul?