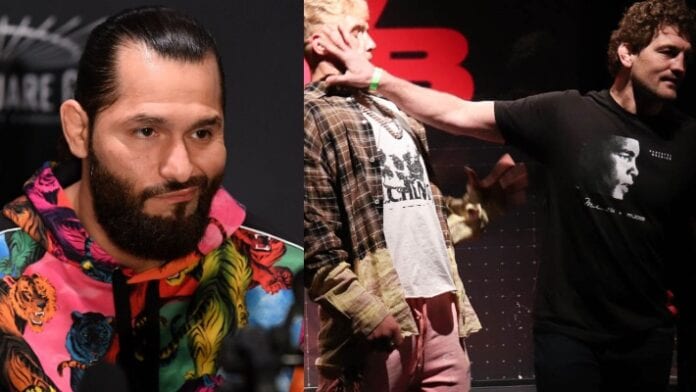 As the much-anticipated matchup between Youtube sensation turned boxer Jake Paul, and former MMA fighter Ben Askren draws ever closer, the pre-fight trash talk has been as prevalent as ever.

The two men repeatedly clashed both verbally and physically at the recent pre-fight presser. Jake Paul stated he would “do a homicide” on Askren, and received a push in the face from ‘Funky’ in response.

Jake Paul also got his training partner, and previous opponent of Askren, Jorge Masvidal on the phone. Masvidal of course picked up the fastest ever KO in UFC history over Askren, with a brutal flying knee right out the gate.

When put on speaker, ‘Gamebred’ could be heard asking “Are you still alive? Tell him I like them flip-flops.”

Even after Masvidal was no longer on call, Paul continued to berate Askren for being knocked out in such a manner. He had the following say:

Askren, ever ready with a comeback, pointed out that it would be hard for Paul to replicate Masvidal’s finish, especially considering they will be fighting in a ring, not an octagon.

The intriguing matchup will take place on April 17th, and will be Askren’s first professional boxing match. Jake Paul has fought professionally twice, although neither matchup has been against opponents with an actual combat sports background.

Who do you see winning out of Jake Paul vs Ben Askren? Let us know in the comments.