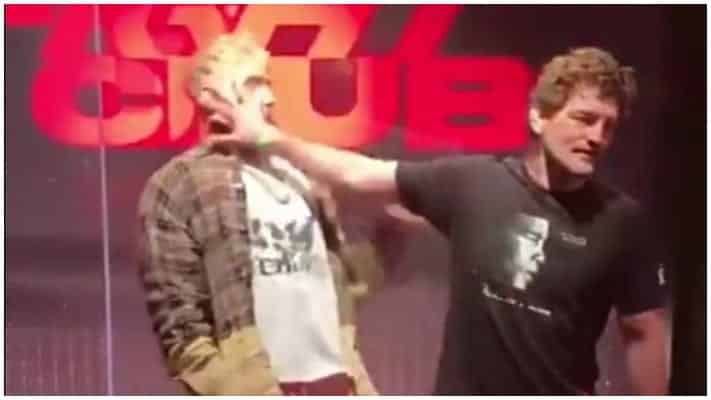 Jake Paul and Ben Askren got a little heated during their first face off.

The YouTube star is set for his third professional boxing match against Ben Askren on April 17.

Paul transitioned to professional boxing in 2020 and has been successful against extremely low level opposition.

Most notably the 24-year-old knocked out former NBA player Nate Robinson on the undercard of Mike Tyson vs. Roy Jones Jr.

Askren was a world champion in MMA, holding titles with ONE Championship and Bellator during his time in the sport.

He’ll be making his boxing debut when he squares off against Paul next month.

Ahead of the Triller pay-per-view event, Paul and Askren met for the first time at a pre-fight press conference.

The pair traded jibes throughout but things escalated when they faced off.

Askren puts his hand in the face of Paul and pushes it away.

The internet celeb responds by throwing a short body shot and shoving ‘Funky’ in the back as he tries to walk away – check it out below.

Who do you think will win this boxing bout on April 17? Jake Paul or Ben Askren?