LowKickMMA.com
Home UFC News Jake Paul claims Dana White is ‘doing everything he can to hurt’... 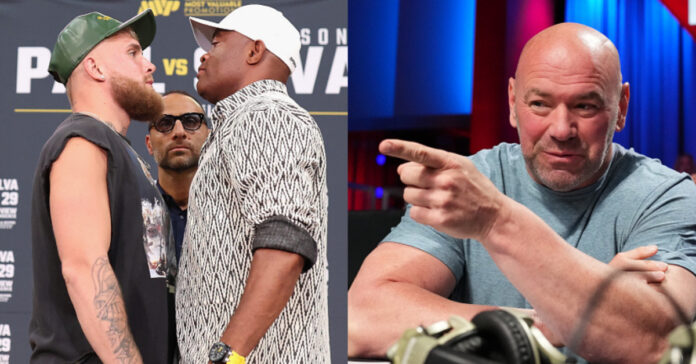 On October 29th, social media star Jake Paul will put his money where his mouth is when he steps into the boxing ring against his toughest opponent yet.

The YouTuber turned professional boxer is scheduled to main event a Showtime pay-per-view card with UFC legend, Anderson ‘The Spider’ Silva. Just weeks out from the intriguing boxing showcase, Jake Paul is accusing Dana White of sabotage. In a post on Twitter, Paul claimed that the UFC President was “doing everything he can” to hurt the event.

“Dana White is doing everything he can to hurt the Anderson Silva PPV promotion,” Paul tweeted. “The same Silva he said I would never fight. The same Silva he has kept out of UFC Hall of Fame. Just shows how much he fears what I’m doing. Trust me change is coming & we are getting organized.”

Of course, Paul chose not to elaborate on his comments, but fans immediately began to speculate that his comments were a preemptive attack to explain a potentially low pay-per-view buyrate once the event is in the books. Though that is pure speculation, Jake Paul’s last outing, a rematch with former UFC champion Tyron Woodley, was said to have delivered less than 65,000 buys. Paul quickly called “bullsh*t” on the reported numbers while also confirming that it was not his “best business night.”

Jake Paul has spent the majority of his combat sports career taking shots at UFC President Dana White and a plethora of the promotion’s fighters. Perhaps it’s time for the undeniably successful, yet arguably obnoxious social media star to find a new gimmick. Starting off by taking on fellow content creators and former NBA players, ‘The Problem Child’ steadily climbed his way up to fighting other combat sports athletes. However, those athletes were far from the elite when it comes to striking.

To his credit, Anderson Silva is one of the greatest and most innovative strikers in the history of mixed martial arts. He also goes into the bout with a win over boxing icon Julio Cesar Chavev Jr. It will be Jake Paul’s biggest test to date, but the fact remains, Anderson Silva is 47 years old, 22 years older than his October 29th opponent. Silva is no doubt a combat sports legend, but are fans willing to shell out $60 in order to see a UFC fighter far past his prime take on an internet celebrity?

If Jake Paul wants to find long-term success in the boxing ring, it will eventually need to come against other professional boxers. The well of fans willing to pay big money for borderline freakshow fights is quickly drying up.