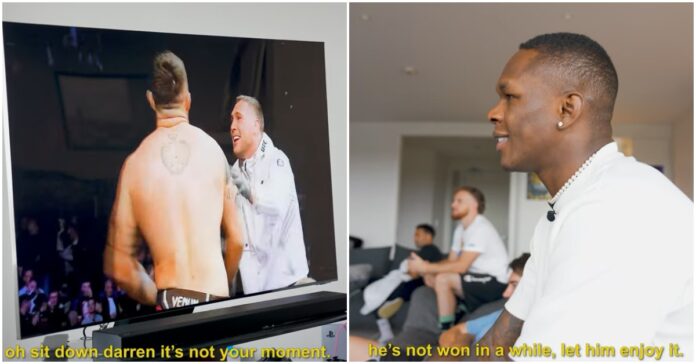 UFC London was a massive event featuring some of the greatest up-and-coming UK talents. Israel Adesanya was watching the action and had a few choice words for UFC star Darren Till about his celebration with Tom Aspinall.

It was a gigantic night for European talent, and we got to see young stars further proving themselves. Paul Craig had an insane comeback victory over Nikita Krylov, as did Ilia Topuria over Jai Herbert.

“Meatball” Molly McCann stood out with a dominating performance, as did her close friend Paddy “The Baddy” Pimblett. They both garnered impressive finishes, with “Meatball” knocking her opponent out cold with a spinning elbow, and Pimblett submitting Kazula Vargas.

Releasing a video to his youtube channel, Israel Adesanya can be seen relaxing with friends watching the fights. As Aspinall secures the victory over Alexander Volkov and hops on top of the cage with Till, things take a funny turn.

“Straight armbar… no way… no one ever taps from a straight armbar. Wow!” Adesanya says, reacting to the finish.

On-screen, Aspinall and Till can be seen climbing on top of the cage celebrating. “Oh sit down Darren, it’s not your moment,” one of Adesanya’s friends would say.

“Sit the f*ck down. It’s not your moment, get the f*ck off…” Adesanya groaned, cringing. Then, things would take a hilarious turn as another of “The Last Stylebender’s” buddies would chime in: “He’s not won in a while, let him enjoy it!”

Everybody burst out laughing, and it was honestly a witty remark. Till is 1-4 in his last five and hasn’t won a fight in almost three years.

Israel Adesanya is 10-1 in the UFC and is currently the promotion’s middleweight champion. He’s undefeated at middleweight and is coming off a successful title defense against Robert Whittaker at UFC 271.

What are your thoughts on Adesanya’s reaction to Till celebrating with Aspinall? Leave your comments below!