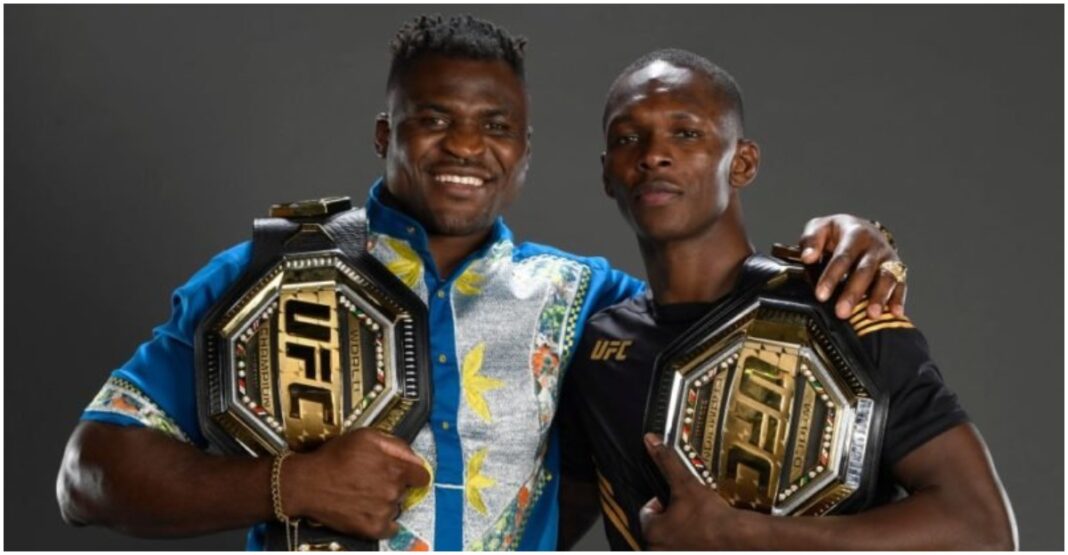 The second victory over Robert Whittaker marked Israel Adesanya‘s fourth title defence in his dominant reign at the top of the middleweight division. It’s safe to say it was a successful business trip for the champion who signed a new deal earlier in the week with the promotion, making him one of the highest-paid mixed martial artists of all time.

Israel Adesanya expressed he was pleased with the new deal, with the UFC noticing his worth and value to the organisation. Claiming he understands all sides of the game, not just fighting.

However, his fellow African friend, Francis Ngannou, hasn’t had the same luck in securing a new lucrative deal with the promotion after several back and forth’s. Ngannou, who defeated Ciryl Gane in the opening pay-per-view of the year, has been campaigning to be paid more by the UFC and insisted he would no longer fight for $600,000 paychecks.

In the post-fight press conference, Israel Adesanya did have Ngannou’s back but did believe the UFC would do the right thing and pay Ngannou handsomely.

“I signed this bout agreement on Monday. I don’t know where this narrative [has come from] that they just gave me a new deal because of what’s going on with Francis [Ngannou]. I’m like ‘no.’

“My dealings with the UFC don’t need to be brought forth because every case is different.

“With Francis’ case, he needed to bring that forward because it was atrocious and I respect him for that. “Like I’ve said, this is the first step. Dana [White] already said they had dinner with him before they went back to Cameroon, they’re going to have dinner when they come back, so yeah, people make mistakes. The UFC is filled with humans – humans make mistakes. Human error.

“But, we can always amend those mistakes and honestly, the rising tide lifts all ships. With this [his new deal], I feel like this is the first step to the trickle down effect that will lift up the rest of the fighters.”

Israel Adesanya also campaigned for the fighters at the bottom end of the scale in terms of pay, who are making their debuts, and need to cover training costs, travelling costs, as well as providing for their families.

“I’m not saying pay the debutants crazy money, I’m just saying pay them enough to train, feed their family and not have a second or third job,” Adesanya continued.

“We’re UFC fighters. I love this company. I’ve wanted to be here for so long so now that I’m here, I’m fortunate to be in the position I am to sign this new deal, but the UFC is going to do right. I feel this is the first step.

“Francis started it off and I’m getting my dues as well, but trust me, it wasn’t just handed to me. My team fought for what we have. I feel this will trickle down to the rest of the fighters because it’s time. Yeah, it’s time,” said Adesanya.

When Francis Ngannou returns from Cameroon, he will meet with UFC President Dana White in the hope of sticking with the promotion. Do you think Ngannou will get that deal that he’s looking for?