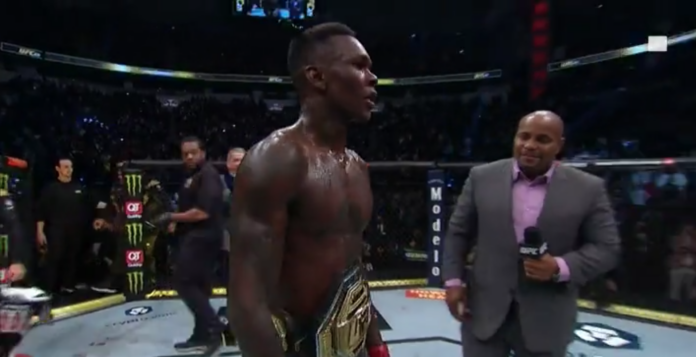 A much more measured and patient approach to the first round for Whittaker than their initial pairing, with the challenger electing to momentarily lunge forward, but sit on the outside for the round. Adesanya with a slew of leg kicks and jabs, and sat down Whittaker late in the frame with a well-placed straight left.

Some more urgency from Whittaker in that second round, landing some decent counter shots early, but was unable to secure top position from a lengthy takedown charge forward, with Adesanya then forcing the clinch. Adesanya finding that lead leg on cue.

Another positive round for Whittaker, however, the champion is likely three rounds to the good regardless. More pressure and pressing for a takedown in that frame sees Whittaker go two for five for attempts. Adesanya continues to chop that leg. Advice in Whittaker’s corner is push for a “blast double” takedown.

Likely the closest round of the contest in the fourth, with Whittaker jabbing well and also taking Adesanya’s back standing before he was shaken off. Adesanya winning this fight but these rounds are getting closer and Whittaker is finding his range. Final five incoming.

An impressive fifth round from Whittaker, who scores the frame, however, Adesanya successfully defends his middleweight title in the pair’s rematch.

Below, catch the highlights from Israel Adesanya’s title defense against Robert Whittaker