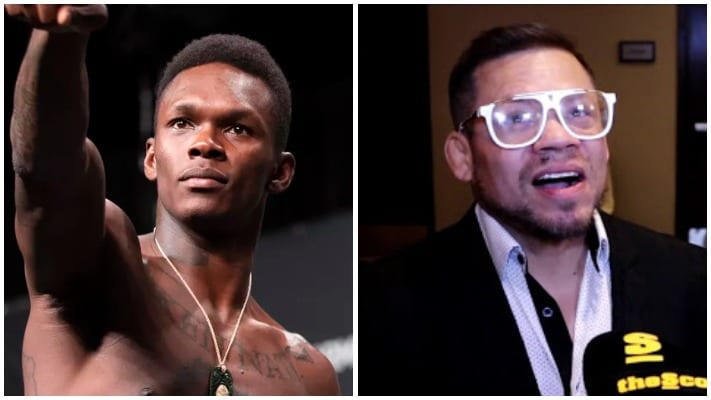 Israel Adesanya has gone in on the coach of Paulo Costa after beating the Brazilian in the UFC 253 main event last night.

Adesanya took exception to the pre-fight antics from his opponent who was being cheered on by Eric Albarracin who is most well known for his work with former dual-weight UFC champion Henry Cejudo.

Speaking at the UFC 253 post-fight press conference Adesanya explained that he knew Costa was going to try and give him a white belt and speculated that Albarracin was the man who concocted the stunt, he said.

“At the weigh-ins, that stare down. I could see it already. I knew what he was gonna do. I knew he had a black belt underneath his shirt, and I knew he was gonna try hand me a white belt. I know that’s the work of old cringe, little gremlin, little smeagle. He tried to throw it in my face and I swooped it with my left hand and I whooped his face with my right hand.”

Adesanya clearly wasn’t happy with the antics from Costa’s cornerman and took time out to slam Albarracin while talking to reporters after his emphatic second round win over Costa, he said.

The antics didn’t stop even on fight night as Albarracin continued to try and get a rise out of the champ even as he was in the Octagon ready to go to war.

“Even before the fight I could see him through the fence, my peripherals could see him through the fence trying to like (waves arms) he was doing this sh*t. Literally he was doing this sh*t (waves arms and laughs),” Adesanya explained. “What do you think I’m going to do? Focus on you? I’ve got a beast in front of me. Someone who is actually going to try and f*ck me up. This is bulletproof (points to head), this is bulletproof you cant get through this. I said something to him I can’t remember. He said, ‘we’re coming for you and I said something like na I’m c*mming on you.”

Do you think Eric Albarracin stepped over the line while trying to get in the head of Israel Adesanya pre-fight?