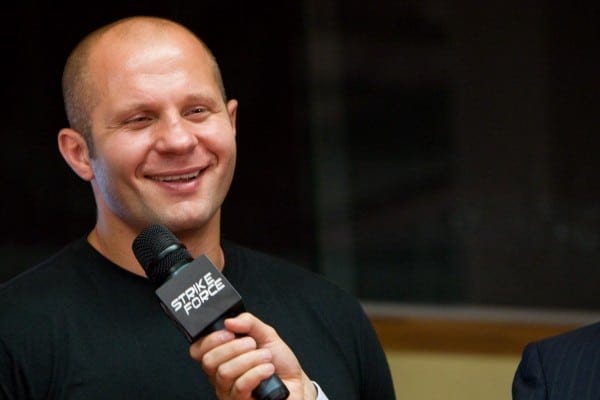 Fedor “The Last Emperor” Emelianenko is widely considered to be one of the greatest fighters to ever compete in mixed martial arts (MMA), and undoubtedly the best heavyweight fighter of all time, but he hit a rough patch at the end of his career and hung up his gloves in 2012.

However, it seems as if the former Pride champion didn’t hang them up for good, as it is now clear that he is coming out of retirement and planning a return to competition. Speaking with Russian news outlet Union MMA, “The Last Emperor” said that every man must do what he loves, and for Emelianenko, that is fighting.

He stated that over the last three years he has stayed in shape, but he has recently assembled a team and started to train intensively again. The former champion also stated that negotiations have started with numerous promotions, and once he signs with a promotion, a date and a fight will be announced:

“For every athlete it is very important to be able to engage in their favorite thing: give all the best in training, performing in competitions, defending the honor of the motherland,” said Fedor on a statement released in his native tongue.

“During my time at the Ministry, I was able to work on the development of the sport, work closely with the presidents of sports federations, recognize the problems from within the sport, and as far as possible, try to solve them. But now I feel that it is time to return to the ring.”

“I was able to recover and heal old injuries. The last three years I have maintained physical form, but this level is not enough to go into battle, therefore recently I started intensive training. We have assembled a team of versatile coaches and athletes who will help me in the training process” Emelianenko continued. “There is still work to do to prepare to leave the ring. Negotiations are underway with promotions. Once agreements are reached, there will be information on the date of the fight and rival.”

This is ground breaking news as one of MMA’s greatest combatants is coming back for one more run. But where could he be headed? Emelianenko was in America recently for a Bellator show. Could he be stringing up a deal with his former Strikeforce employer Scott Coker to head to the Bellator cage?

Stay tuned to LowKickMMA for up to date news on this story.