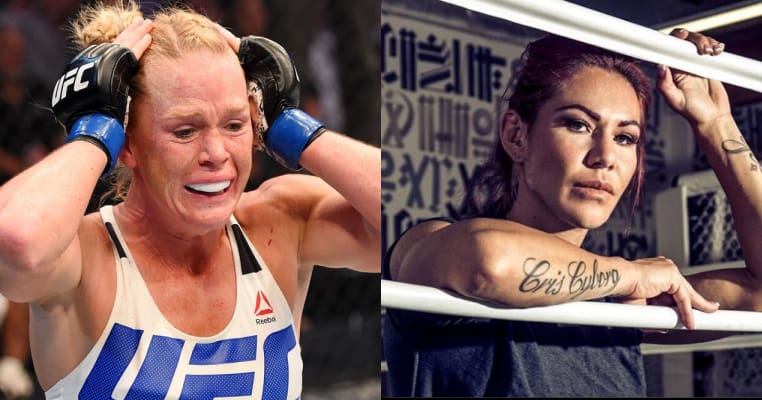 It seems everyone is interested in fighting at 145 pounds, just not when Cris Cyborg is involved…

The scheduling of the inaugural women’s featherweight title fight has been met with raised eyebrows. Since joining the UFC earlier this year, Cris Cyborg has been crying out for a 145-pound division. Claiming she was told it’s ‘140 pounds or you don’t fight,’ the Brazilian has made the severe weight cut twice in 2016. Quoted as saying ‘there’s not enough women at 145 to make the division,’ UFC president Dana White has again contradicted himself.

Also saying ‘this is a business,’ White has pretty much snubbed the best female featherweight on the planet with no remorse. That being said, Cyborg openly admits she turned down the title fight, but only because she needed ‘more time’ to recover from her brutal weight cuts. Before we look at the Holm aspect of this story, let’s analyse the numbers behind Cyborg’s title fight notice. 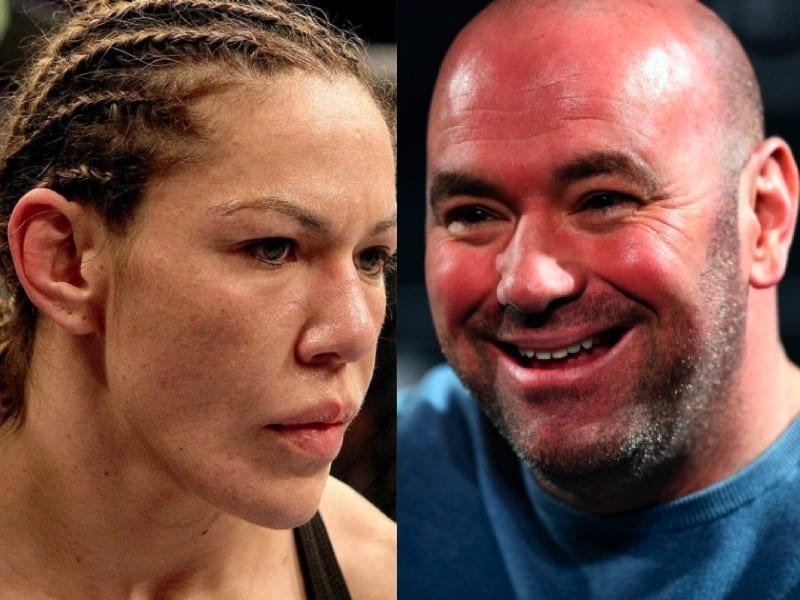 During a great breakdown of title fight notice by Bloody Elbow’s Michael Hutchinson, we learned that Cyborg’s notice of 60 days was well below the promotional average of 89.16 days, but not unheard of. The main differences here is that she exhausted her body by making 140 twice, because of the UFC’s unwillingness to open a new division. But why? Why now, and why without Cyborg? Holm has lost her last two fights in a row, and ‘GDR’ has only fought once at featherweight during her Strikeforce career, and lost that bout.

Now booked to fight for the second title in her UFC career, former women’s bantamweight champion Holly Holm could again make history. Having already squashed Ronda Rousey at UFC 193, the first to do so, ‘The Preacher’s Daughter’ would set another first with a win over Germaine Da Randamie. She’d be the first ever two-weight women’s champion, an achievement that could quite easily remain intact for a very long time. This huge task ahead is still being met with questions about why Holm has turned down fights with Cyborg in the past, and her coach Mike Winklejohn responded last night. 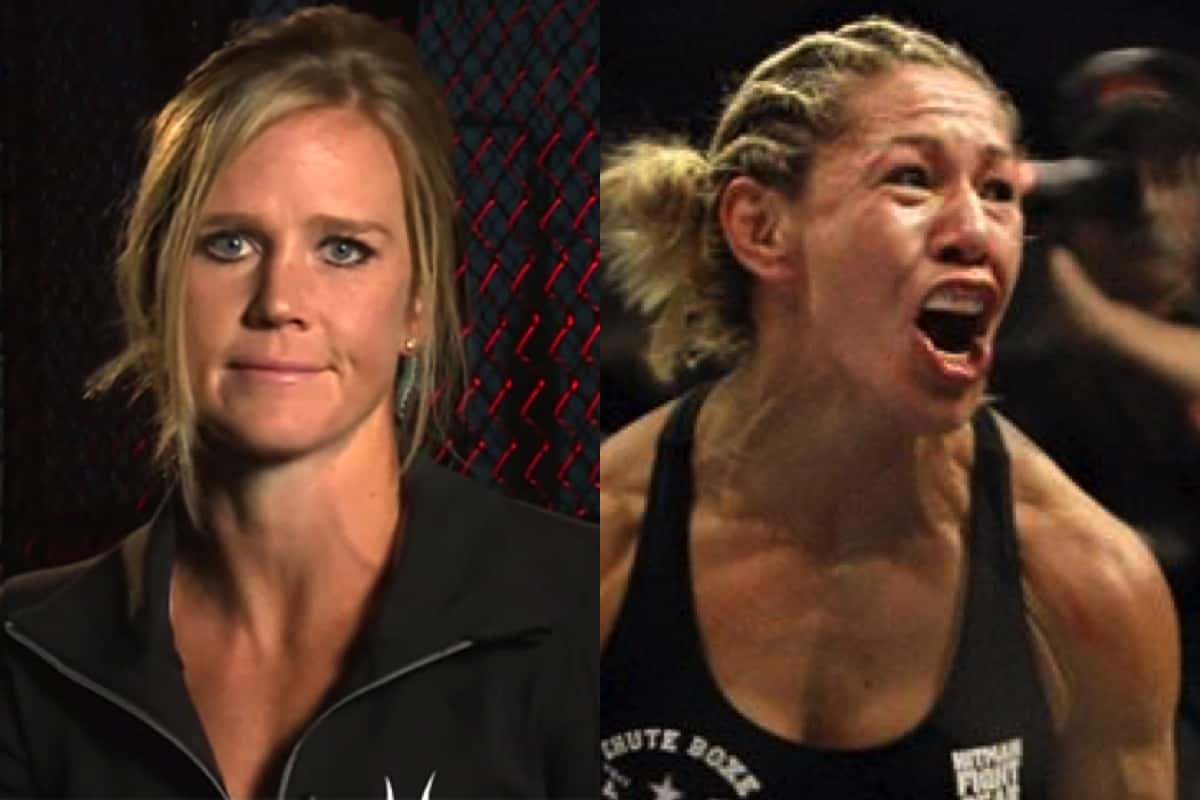 During an appearance on The MMA Hour on Monday, Winklejohn attempted to clear the air about Holm & Cyborg. If anything, he did the exact opposite. Here’s what he told Ariel Helwani when asked about Holm jumping up to 145 for Randamie, but not Cyborg:

“Cyborg can’t make the normal 135-pound division. We said ‘OK, we’re willing to fight you at 138.’ I won’t lie, we probably would have gone to 139 with that. It didn’t make sense for Holly to go up and fight at a higher weight, of course not, why would I do that? Apparently (Cyborg) turned that down, then Dana came up with the 145-pound title, and Cyborg turned that down as well. Holly has never turned down a fight in her life. Fighting her t 135 would have been a smart move, 136 would have been a smart move. That’s where we’re at. If Ronda (Rousey) wins against Amanda Nunes, we will 100% do that fight (for 145 pound title).”

So it turns out it does make sense for Holm to move up to 145 pounds then? Also noteworthy are Wink’s comments about fighting Cyborg at a ‘smart weight.’ Wondering why we’ve highlighted those two quotes? Read on… 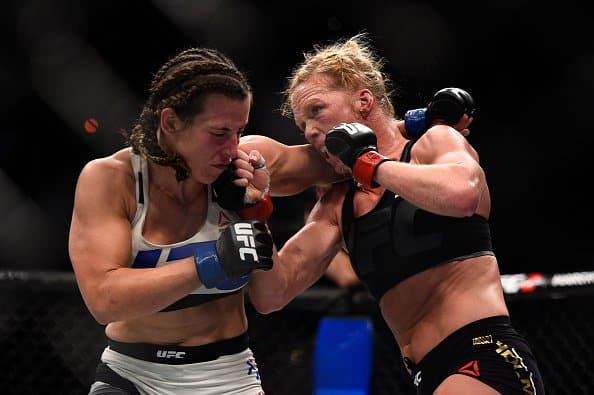 Speaking in May of this year, Holm openly admitted that she turned down a fight with Cris Cyborg. This came two months after she’d lost to Miesha Tate at UFC 196, handing her belt to ‘Cupcake’ in the process. Check out these quotes by Holm from MMAMania in May:

“I’m not even stuck on the 135 compared to 140, that’s not really a big thing for me. They did call me for the fight, that is definitely true. I was so focused and I really wanted to see if I was going to get that rematch for the belt because that is where my passion was really facing. And that was around the time they asked me for the fight with Cyborg and I was holding out to see if I could get the rematch. To me, I am not against fighting Cyborg, it just didn’t really seem like the right time.”

Without sounding accusatory, there seems to be a whole lot of reasons why Holm hasn’t been able to fight Cyborg in the past. Her coach just admitted that Cyborg was essentially too big, also claiming they’d fight her at 138 pounds, even though Holm herself said she’d face Justino at 140. What a mess this whole saga is turning out to be.

Cristiane Cyborg Justino’s MMA career consists of 17 wins and one loss (her debut). She’s undefeated in 11 years of MMA competition, and without doubt the best female 145-pounder on the planet. It’s for these reasons you’d think the UFC would be dying to have her front their new featherweight division. As the last few weeks have shown, it’s almost the exact opposite of that statement.

Recently claiming Cyborg had turned down two, then later saying it was three featherweight title fights, Dana White said the UFC had done everything possible to get Cyborg in the first featherweight title fight. Ending up scheduling Holly Holm vs. Germaine Da Randamie as the inaugural w-145 title fight, the UFC is yet again missing out on a big opportunity. Is keeping to a schedule the real reason the promotion wasn’t willing to give Cyborg 12 weeks notice? You know what they say about time being money.