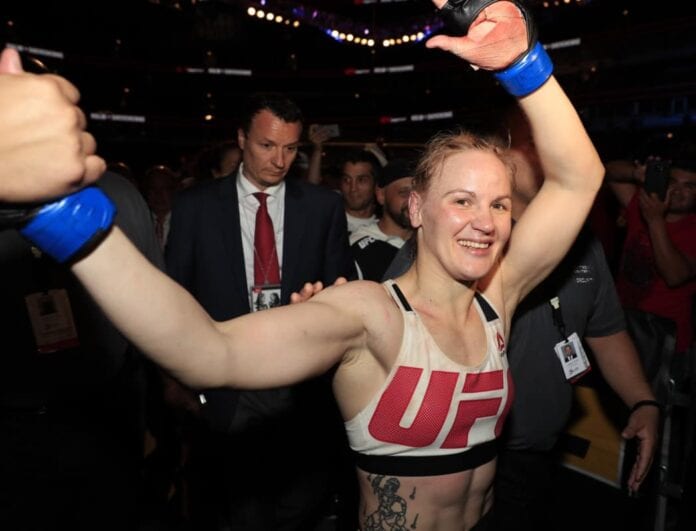 The two southpaws square off in the center of the ring. Shevchenko flicks out a an inside leg kick. A side kick misses for Holm. “Bullet” counters a teep from Holm with another inside leg kick. Shevchenko lands a right hook on the former champion. The two trade leg kicks, but then a right from Holm drops Shevchenko along the base of the fence. She is right back to her feet, however. Shevchenko stands in her traditional Muay Thai stance and hits leg kicks while waiting for Holm to close the distance. “Bullet” looks for a right hook any time Holm comes forward. A couple right jabs fall short for Holm. The two exchange body kicks simultaneously with a minute and a half left. Holm throws an overhand left as Shevchenko tries to hit her right hook, but the two end up in the clinch. Shevchenko immediately trips Holm to the mat, but the Jackson-Wink rep pops back up just as quickly. Holm holds “Bullet” against the fence, landing a knee to the body. They adjust position, but Holm is still pushing Shevchenko against the cage. Holm works the legs with knees while Shevchenko hits her own to the body. They break with about ten seconds left and the round comes to an end.

As round two begins the two women stand and stare each other down at range. Shevchenko lands another inside leg kick, and a few seconds later attempts an axe kick. It glances off Holm’s shoulder. Holm throws a side kick to the body. The Russian striker ducks under a 1-2 to clinch up with Holm, but again finds herself pushed into the cage. She pummels for the Thai plum, but Holm pulls out and they’re back at range. “Bullet” is still looking for the counter right hook. A long straight from Holm falls short, but it is immediately countered by a spinning back fist. Holm pushes Shevchenko back with a side kick and then lands a right shovel hook, but eats a hard straight left in return. “Bullet” lands another low kick. Holm lands a jab but is countered by the right hook. Shevchenko hits a straight left again. A stomping oblique kick from Holm temporarily staggers the off-balance Shevchenko. The Russian attempts another back-fist, gets pushed back by a side-kick, then lands a low kick as the bell sounds.

Round three begins as before, with the two southpaws trading half-strength leg kicks. Holm has right leg cocked and ready for a push kick or oblique kick, but Shevchenko hits another counter right hook. Shevchenko tries another spinning back-fist at the same time Holm tries for a Superman punch. Neither connects cleanly. Shevchenko throws up a head kick but it is blocked. Valentina counters a straight left-leg kick combo with yet another right hook. “Bullet” catches a Holm body kick and dumps her to the mat at the base of the fence with three minutes left. Holm eats a right hand as she gets back to her feet, but her superior strength once again allows her to switch position and push “Bullet” to the fence. After the two women exchange knees, Shevchenko trips Holm to the mat and lands in a half guard. The Russian holds Holm down, potentially looking to trap one of the former champion’s arm to set up a crucifix. She bails on it and lands a couple short left hands. Holm is bleeding from a cut above her right eye, but the blood is flowing down the side of her face, away from her eyes. Shevchenko lands a few short elbows before the round comes to a close, but did not do a ton with top position, other than securing the round.

The championship rounds begin with the two women eating simultaneous right hands. Holm lands a side kick, pushes forward with a 1-2, and lands a body kick as Shevchenko hits a leg kick of her own. A 1-2 followed by a low kick lands for Shevchenko. She then counters another side kick from Holm with a wheel kick, but it is blocked. The two women exchange hard leg kicks, and Shevchenko continues to score with the right hook over the top. The Russian looks to be timing Holm, who is getting more aggressive, pushing forward. A 1-2 misses for Holm, who ducks the right hook from “Bullet”, and then lands a leg kick. Holm steps out of a low takedown attempt from Shevchenko. “Bullet” tries to catch a body kick from Holm and clinch up, but to no avail. The women are trading punches but not much is landing with any force. With 30 seconds left, the bantamweights exchange body kicks, a left hand lands for Holm, and Shevchenko hits a last low kick as the round ends.

The final round starts with Holm pumping her jab, but as soon as she commits to one, she is met with the right hook of the Muay Thai fighter. Valentina lands a hard jab of her own, but absorbs a body kick. Shevchenko lands a Superman punch. The two women exchange leg kicks, and then Shevchenko lands a hard straight left. An outside leg kick and a counter right land for “Bullet”. Shevchenko tries to clinch up as Holm hits a body kick again, but fails once again. Two jumping front kicks from Holm fall short, but Shevchenko hits a counter wheel kick that is blocked. Another Superman punch from Shevchenko is countered by a cross from Holm. With two minutes left, the strikers exchange leg kicks. Another hard right lands for the Russian, then a cross of her own. Holm hits a right hook and a body kick. A side kick from the former champ leaves the attempted wheel kick from Shevchenko well short. The two whip kicks into one another as the seconds tick away. Shevchenko lands a combination as “The Preacher’s Daughter” pushes forward as the fight ends.