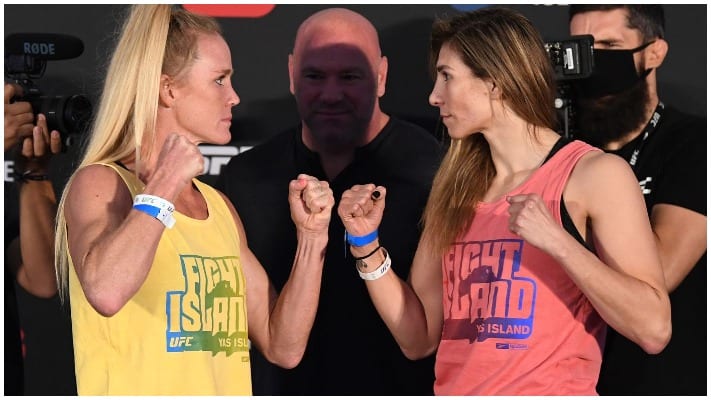 Round 1: Holly Holm opens up with a side kick to the body. The former champ follows up with another side kick to the thigh of her opponent. Irene Aldana rattles off a low leg kick. Holm lands a nice left cross – the most significant shot so far. Holm is blitzing forward with lots of volume but Aldana is just keep her guard tight and edging out the way. Aldana manages to punish the heavy output from Holm with a nice counter. Holm still manages to land well after eating that shot though. A nice sidekick to the body from ‘The Preachers Daughter’. Holm changes levels and shoots for a takedown right across the cage. Aldana does really well do the defend but finds herself pressed up against the fence. Holm eventually gets her opponent to the mat as the bell sounds to end round one.

Round 2: Aldana lands a big counter right hand at the start of round two. Holm takes it well and gets back to her leg attacks. Another blitz from the former champ get a reaction from those in attendance. Holm throws a big right hand that lands flush. A sharp straight lands for Holm not long after – she follows up with another flurry of shots. Holm keeps mixing in the takedown attempts to keep her Mexican opponent honest. She manages to drag it to the mat and lands in side control. Aldana get the butterfly guard and pushes Holm off before popping back to her feet. Aldana comes in but is made to pay as she eats a four-piece combo. A spinning back kick to the body and a nice hook end a great five minutes for Holm in round two.

Round 3: Aldana lands a leg kick at the start of round three. A nice counter as Holm leaps in too. The 38-year-old goes upstairs with a question mark kick that lands but doesn’t bother Aldana. Holm level changes and gets the takedown again. Aldana tries to pop straight back up but Holm does well to secure the position. Holm is in side control working on a kimura but quickly bails on the submission attempt. Holm steps in to mount and starts dropping nasty ground and pound. Two minutes left on the clock, this is a really bad spot for Aldana. The Mexican does well again to recover position and work her way back up. She doesn’t get a moment’s rest thought as Holm comes flying towards her with a fast combo. Aldana is trying to press forward but Holm is on fire right now she keeps her opponent at distance with another nasty sidekick. And another one as the horn sounds to end round three.

Round 4: Holm is now using the forward pressure of Aldana against her – landing a bunch of strikes as the prospect comes in. Aldana is just unable to get anywhere near Holm right now she always seems out of punching distance. She lands a nice jab but eats a big, nasty body kick for her efforts. Another sidekick to the body! Aldana manages to land a couple of leg kicks. Holm shoots in, pushes the fight against the fence. Holm has the body lock and gets the takedown again. The fight quickly returns to standing. Both fighters seem to land simultaneously. Holm fires off a beautiful four-piece once again. Holm seems to be picking up the pace as this fight goes on. She’s even putting more power on her shots too. Aldana is getting aggressive now. The bantamweight fighter doubles up her left hook effectively. Her corner is cheering her on as she chases down Holm at the end of round four.

Round 5: Aldana is continuing with her aggressive pursuit of Holm but is unable to be effective. Holm lands a big counter as she comes in. Aldana lands a nice right hand but is unable to follow up. Holm is still very light on her feet and moving around the Octagon with ease. Every so often she stops to land her own shots. A sidekick to the body. Another to the face! A right hand, followed by another side kick to the body. A huge overhand left from Holm – one of the biggest shots of the fight. Aldana is clearly trying in round five but her forward pressure is used against her as Holm lands another takedown. Aldana pushes her opponent off. As she climbs back to her feet Holm lands a huge head kick. The former champ is steaming forward for the finish. Holm is really putting an exclamation point on this victory at the end of round five – swinging with everything she’s got until the final horn sounds.