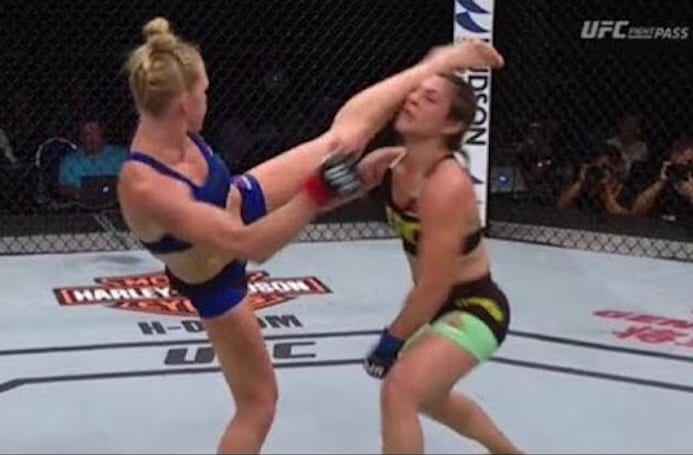 There’s one deceptive kicking technique that has really been starting to be used within MMA and kickboxing. It may look as if one kick is coming, but then the direction changes and a foot slaps your face.

Who created the question mark kick?

The question mark kick that every striking martial art now teaches. One could argue that the original origins of the kick came from karate.

In karate, their style of roundhouse and front kick are delivered in a snapping motion. The question mark kick is a mix of both of those kicks put together into deceptive strike.

Although many Thai boxers including the legendary Saenchai have used the question mark kick and have landed it often.

How does the question mark kick work?

How the question mark kick works is all about a fast twitch motion mixed with deception. The technique starts out just like a normal chambered kick.

You bring your knee up and quickly redirect your kick using a kick hip movement. When you do this quick movement it redirects the force of your kick towards another part of the opponent’s body.

This motion of your leg looks just like a question, which is how the technique got its name. Generally this strike goes to the opponent’s chin with just enough force from the snap to knock them out.

The back leg question mark kick

The set up is really important, because you have to bait the opponent into giving you your opening. One of the best set ups starts with a front kick to the body.

Start by throwing a couple front kicks to the body. This will get them thinking front kick and go to defend the kick dropping their hands. Now you’re ready to throw your question mark kick.

First like with all chambered kicks, you have to bring your knee up. It is really important with this kick, because you really have to sell that you’re throwing another technique.

As you bring your knee up high, turn your front foot quickly to the side. This opens up your hips and enables you to rotate your kick over.

After quickly turning your foot, you redirect your foot bringing it to the opponent’s chin in a snapping motion. The correct way to land the kick is with the ball of your foot. Avoid hitting with the top of your foot to avoid injury.

The speed of the snap and locating the strike to the opponent’s chin is just enough force to knock them out.

The question make kick can also be thrown with your front leg using the same set ups. Set it up the same way by throwing a different kick to get your opponent to drop their hands.

Just like the back leg question mark kick, you have to bring your front knee up high and really sell it. The difference here is you turn your back foot to the side to open your hips and open the angle.

Then just like with the other set up, you redirect your foot snapping it up to the opponent’s chin.

When they start dropping their hands, you’ll bring your knee up and do a slight pause. The slight pause is important, because you’re trying to get them to react and defend another body kick.

Once you do this, you redirect your kick. Your kick goes up and over your opponent’s guard looking just like a question mark symbol.

Here is one combination set up to land your question mark kick. It’s a little different than normal set ups for this kick, because you are using both legs.

The combination starts with a stiff one-two punch to get the opponent’s hands up. Now that you got them thinking about another shot directed at their head, throw a front kick to their body.

This is where this combo is different, because you’re going to use your other leg for the question mark kick. After the front kick lands, your question mark kick comes right after. Your opponent will be so off-balanced with the strikes to their head and body, they won’t know what is coming.

A question mark kick can target way more areas than just the body. You can reverse the entire set up and to land an outside leg kick.

Start by targeting the opponent’s head by throwing head kicks. By repeatedly throwing this technique, they will instinctively keep their hands up to block leaving their leg wide open.

The technique for a question mark leg kick is almost the same as to the head, but at a downward angle. Bring your knee high up to sell the head kick and then turn your front foot and kick downward.

This technique delivers a powerful downward chop on the opponent’s leg that can be quite debilitating and affect their movement. Remember that this is a leg kick, so use your shin and not your foot.

Question mark kick to the body

You can also target the opponent’s body with a question mark kick and there’s two ways to do this. One is to their side and the other is straight down the center to their solar plexus.

For getting the opening to hit the side of the opponent’s body, you can throw either head or body kicks. Throwing one of these head kicks will get the opponent to defend leaving their side open for your kick.

Pick your knee up to sell the fake and angle it downward into the opponent’s side. Using your left leg to hit their liver can definitely finish the fight.

The other option to the body is landing your question mark kick to the solar plexus. Set it up by throwing teeps/front kicks to their face making them raise their arm giving you the opening.

Pick your knee up and angle your leg downward to hit your opponent right in the chest. Landing this will knock the wind out of them and give you the opening to go in and finish them.

A good punch combo you can throw to set up a question mark kick is a 1-2 to front uppercut. These frontal attacks make the opponent think that another one is coming right after this one.

Once you bring your back knee up, they’ll tuck their chin leaving the side of their face open. Quickly change the direction of your foot to land a solid question mark kick.