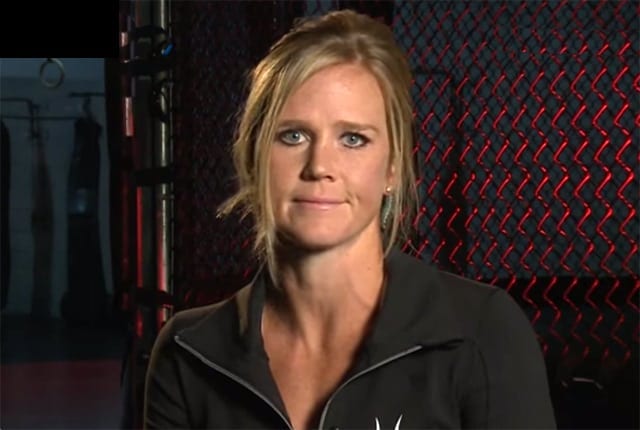 The UFC women’s bantamweight division got thrown a curveball yesterday morning (Friday August 21., 2015) as Ronda Rousey announced she would be facing not Miesha Tate, but Holly Holm as the main event of UFC 195 in Las Vegas. The news came as a shock to many that believed a trilogy fight with ‘Cupcake’ was on the cards, and there’s a general feeling that ‘The Preacher’s Daughter’ may not be prepared for this leap in competition.

Perhaps that sentiment comes from Holm’s statement after her last fight, when she said that at least one more fight was needed to be ready, or maybe it’s just that no-one in the division will be as big a challenge as Cris Cyborg would. Either way, Holm tells FOX Sports by way of MMAFighting.com that she isn’t really too bothered as to the reasons for her getting the shot:

“Maybe it’s one of those things where they just want to test me out, kind of throw me out there,” Holm said Friday on FOX Sports 1’s America’s Pregame. “Maybe it’s because they really feel I’m ready. I don’t really care too much of the why. I just want to make the best of the situation.”

In terms of ‘Rowdy’ vs Holm, the former boxing champion believes that the undisputed 135-pound Queen is trying to make a statement in facing her at UFC 195:

“I think she knows that in beating me that even says more about her stand up,” Holm said. “For a long time so many people were always just talking about her armbar. I think that she wanted to prove to them she has more than that, which she has done just that. So this is a big opportunity for her to really show people what she’s made of.”

Rousey’s striking has certainly evolved exponentially since her more submission-based style back in the Strikeforce days, and her brutal KO of Bethe Correia proved that in heaps. Ao how does Holm feel she be any different from the rest of the champ’s victims?

“First of all, I’m gonna learn from all the other mistakes,” Holm said. “Every fighter has their own style and every style makes a different matchup. We’re gonna go in there with a game plan, but I always leave a little room for adjustments, because you never know how a fight is gonna go. My biggest thing is to just to stay focused the whole time. It’s easy to just kind of say, ‘Oh, we’re here, let’s just go’ and go forward with any kind of thinking. It’s a big mental game in there. I plan on being very composed.”

Composure, a gameplan and education do you feel this is enough to defeat the most dominant finisher in the sport today? The former boxing boss will most likely have the best chance of levelling the striking field, or perhaps bettering Rousey in that department, who knows, but what about on the ground?

Surely if ‘Rowdy’ isn’t keen on trading with Holly Holm she’ll just take her to the mat and go back to the bread and butter game plan. What are your thought?