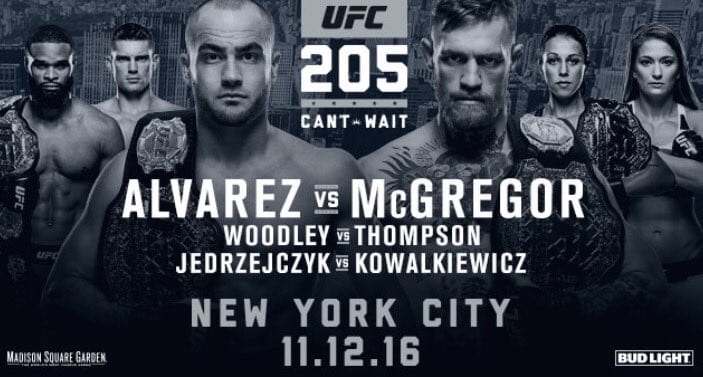 With last night’s UFC Fight Night 98 in the books from Mexico, the MMA world’s focus will shift to this weekend’s (Sat., November 12, 2016) UFC 205 from Madison Square Garden in New York City.

The groundbreaking card, which is the first-ever UFC event from New York City after mixed martial arts was finally legalized in the state earlier this year, is absolutely packed full of high-profile bouts, yet most fans will be fully fixated on the Conor McGregor vs. Eddie Alvarez lightweight title main event.

”Notorious’ will attempt to make history as the UFC’s first-ever simultaneous two weight class champion as he fights, incredibly enough, in his third division since winning the featherweight title in a 13-second finish of Jose Aldo not quite 11 months ago. The fight is definitely one of the biggest in MMA history, and some would argue it simply is the biggest of all time.

Regardless, history is going to be made next Saturday night, regardless of whether or not McGregor wins the lightweight title. To begin getting prepared for the most anticipated event of 2016, watch the FOX Sports 1 UFC broadcast team preview UFC 205 right here: