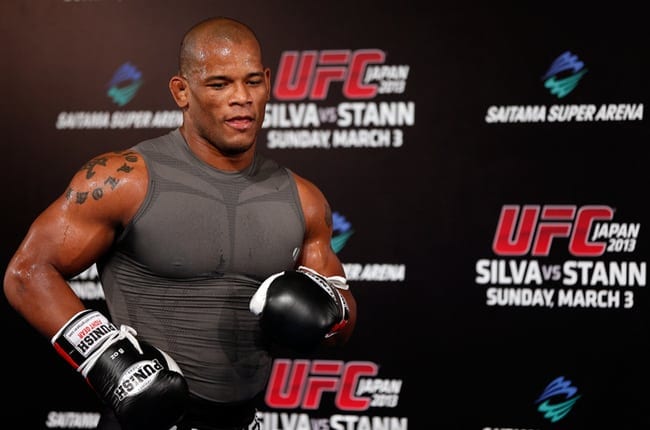 It’s been a while since we’ve heard from UFC welterweight and former Bellator middleweight champion Hector Lombard, as the Cuban-Australian has been shelved since a failed drug test on January 3rd. The highly touted knockout artist was on track for a title shot in the 170-pound division before getting popped for anabolic steroids, he had just beaten Josh Burkman and was scheduled for an April contender match with Rory MacDonald at UFC 186.

The win over Burkman was overturned, and now ‘Showeather’ must pass another drug screen before being licensed again. Now eight months in to his suspension, ‘Lightning’ has emerged to send a message to both ‘Red King’, and his former opponent Rousimar Palhares. ‘Toquinho’ got knocked out in one round by Lombard back in 2012, and went on to win the WSOF (World Series of Fighting) welterweight title, before getting stripped following a highly controversial win over Jake Shields at WSOF 22.

‘Paul Harris’ was up to his old tricks again that night, and Lombard tells MMA Roasted that he was warned about Palhares’ habit of holding submissions for too long before they faced each other. Check it out:

“That f*cker, let me tell you, he’s an evil c*nt. No joke, a friend of mine told me ‘listen mate, don’t let this guy get close to you or get a hold of your leg, if he does he will try and break it, he personally told me he is going to break every bone, he doesn’t care about the referee stopping, he is gonna pop that sh*t.’ I think (Jake Shields) should have punched him more (after the ref stepped in). The guy an idiot, you don’t do that sh*t.”

Palhares’ behaviour got him stripped of the 170-pound belt and also handed an indefinite suspension. Lombard’s assessment may be more colorful than most, but it rings true amongst the general feeling of outrage towards ‘Paul Harris’ right now. On to the subject of Rory MacDonald:

So it looks like Hector Lombard is keen to reignite the rivalry between himself and Rory MacDonald, and it might even make sense. ‘Red King’ is fresh off a crushing TKO loss to Robbie Lawler at UFC 189, suffering a broken nose during one of the greatest welterweight title fights ever.

MacDonald fired back in the aftermath of the interview, with possibly the greatest comeback of all-time:

@MMARoasted @HectorLombard hahaha she is used to that after my fights by now ??? ?

Stay with LowKickMMA for more UFC and MMA news, updates and coverage!