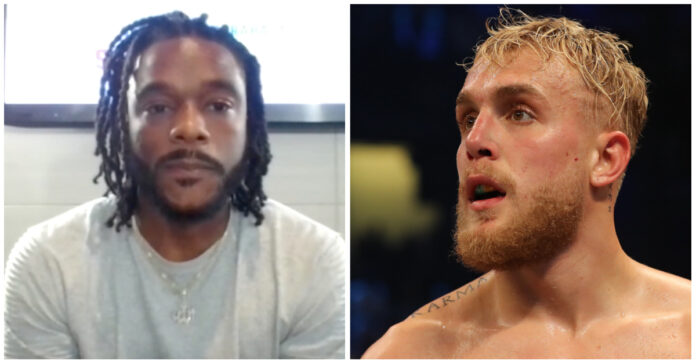 Hasim Rahman Jr. has vowed to bully Jake Paul in their upcoming bout.

YouTuber turned boxer Jake Paul was first lined up to face Tommy Fury in August. With less than 45 days to the event, Fury ended up pulling out for a second time after previously withdrawing from an initial showdown in December where former UFC champion Tyron Woodley was found as the replacement.

Woodley was brutally knocked out by Paul in just 70 seconds. For this time around, Paul found Rahman Jr. as the replacement.

In an interview with TMZ Sports, Hasim Rahman Jr. talked about what Woodley did wrong and assured that he won’t repeat the same mistake.

“Bro, [Jake’s] a little boy, and I’m gonna treat him like one. That’s what Woodley didn’t do. Woodley gave him too much respect, and he sat back with his hands down and he got caught,” Rahman Jr. said.

The 31-year-old believes that Paul hasn’t faced someone who could pressure him down having competed against the smaller opposition in his past outings.

“All of Jake’s opponents have been smaller than him. All of them have been much smaller. This is the first time he’s going to be in there with someone that’s walking him down and much bigger than him.” (H/T TMZ Sports)

Rahman Jr., son of two-time world heavyweight champion Hasim Rahman, suffered his first pro loss in April by TKO. He believes that “The Problem Child” might be drawing too much confidence from his loss but has made sure to swing the odds in his favor with contractual stipulations.

Although the fight is set to be at 200 lbs, Rahman Jr. can only rehydrate up to 210 lbs a few hours before the contest. He bashed Paul for not being the tough person he puts out to be and stated that there’s no chance Paul could beat him.

“If you really wanted to make a statement you would’ve came up to heavyweight and fought me. But you didn’t. You wanted to bring me down, and stack the deck against me, so you could actually have a fighting chance. He knows he has no chance against me had it been at my weight class.”