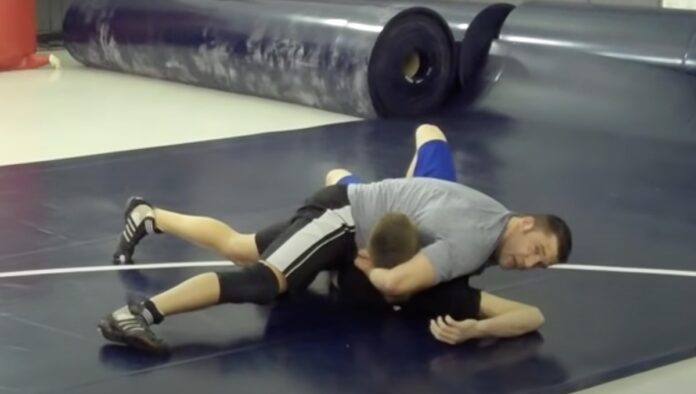 For those that have competed in wrestling, they are well aware of the power of the half nelson hold. This effective technique has translated very well to Jiu Jitsu, where it’s to advance to dominant positions and set up submissions.

Who Invented The Half Nelson?

The half nelson has been an effective technique that has been used in wrestling for thousands of years. It has primarily been used as a way to control an opponent.

Hooking their arm and controlling their head to either force them to their back or just control them. The effectiveness has led to all forms of grappling like BJJ and MMA to adopt the technique.

It has evolved from just a controlling position in wrestling to a more diverse technique in the other forms of grappling.

Fighters now use the half nelson to do everything from advance to better positions, set up submissions, or land strikes.

How Does The Half Nelson Hold Work?

The half nelson hold gives you control over your opponent by controlling their head and arm. In wrestling, it is predominantly used to force an opponent to their back to gain points and set up a pin.

Jiu Jitsu and MMA have adopted the move to do a wide variety of different tactics. You can use the move to do everything from set up submissions, back takes, advance to mount, or just strikes.

It is an incredibly effective move that all grapplers within BJJ, wrestling, and MMA learn to improve their ground games. They all use it, because it’s proven to be effective.

The Traditional Half Nelson

The traditional half nelson hold in wrestling is used to turn your opponent to their back and set up a pin. It starts when you already have your opponent flattened out on their stomach.

To start the half nelson, you gain wrist control on their far arm by reaching under their arm. Grab their wrist and pull it into their chest.

Next, lift your chest up, and drive diagonally as you force your opponent to roll their head under their shoulder. Making them do a forward roll to their back.

In wrestling, you can now set up your pin or take the mount if you’re doing BJJ training.

The power half nelson is a stronger version of the standard half nelson that’s done a variety of ways. This variation starts out where you have your opponent flattened out and a figure four on their leg.

Base your hand on the back of their head and reach under their arm with your other hand. Grabbing the blade of your opponent’s head and bringing it to their head.

Next, you can either lock in the half nelson by grabbing your wrist or your opponent’s wrist. It makes no difference as the control is the same.

To turn your opponent to their back, undo your figure four, step toward their head, and keep turning your arm. Do it slowly to keep pressure on their neck/back as they go to their back.

Gordon Ryan’s Half Nelson Hold For Back Control

In Jiu Jitsu, Gordon Ryan has been using the half nelson in his back attack system for years. It creates optimal control over his opponent’s to set up submissions and make their lives miserable.

Ryan uses it in a variety of ways to make his opponents turn and set up his rear naked choke.

Half Nelson On Turtles Opponent

When Gordon is on his opponent’s back, he is able to make them turn on his side by using a half nelson. He switches from the traditional seatbelt grip, bringing his top arm behind his opponent’s head, and Gable grips his hands together.

The blade of his forearm presses into the back of his opponent’s neck to apply pressure as he makes them turn. It’s normal for an opponent to try to block the turn by basing out with their hand.

When they do this, Ryan anchors his back foot to the mat and forces them to turn. Once he addressed this counter, Gordon uses his half nelson to force his opponent’s head down and gets his hooks.

Half Nelson To Mount

Ryan has also been shown to use the technique to take the mount position. The use of this technique works similar to how it’s traditionally used in wrestling.

You have your opponent’s back with them flattened out, but you want to take mount. Lock on the half nelson to force them to turn and get the mount.

Another Back Attack Variation

There’s a nice back take that involves using the half nelson to open your opponent up when they’re turtled. Start by pulling your opponent off-base towards you on their side.

When they go to recover, hook your near leg onto their near leg to establish a point of control. Next, you’re going to go into lock on your half nelson hold on their far arm.

Hook one hand under their far arm and frame your arm on the back of their head. You can either lock your hands together with a Gable grip or S-grip.

As you lock in your half nelson, take your free foot and hook the inside of your opponent’s far foot. Use the half nelson grip along with the foot hook to pull your opponent into your back mount.

Half Nelson To Defend Guard Recovery

A lot of BJJ grapplers have begun using a pseudo form of the half nelson hold to counter their opponents’ recovering guard. From the side control, your opponent tries the traditional escape by turning in and doing an elbow escape.

When they turn in, you’re going to take semi half nelson on their near arm. Your arm overhooks your opponent’s arm and your other hand bases on the back of their head.

Use this semi half nelson to push your opponent’s head in as you transition around their head. Going to the other side control and controlling them from there.

The half nelson hold can also be used as a submission, which in catch wrestling they call a hammerlock half nelson. A mix of the two techniques with numerous variations that are taught.

When your opponent is in turtle, hold their hip with one arm and take wrist control on their near arm. Next, flatten them out by driving forward as you push your forehead into their elbow.

Once they fall to their stomach, slide your wrist control up and grab your opponent’s tricep. From there, keep your weight down as you slide across their back to the other side of their body.

Take your half nelson on that side to establish full control over your opponent. Drive forward, lock your hands, together, and keep driving forward to put immense pressure on your opponent’s arms and neck.

A half nelson hold provides optimal control over your opponent, no matter what form of grappling you’re doing. Here are important tips and details to remember.