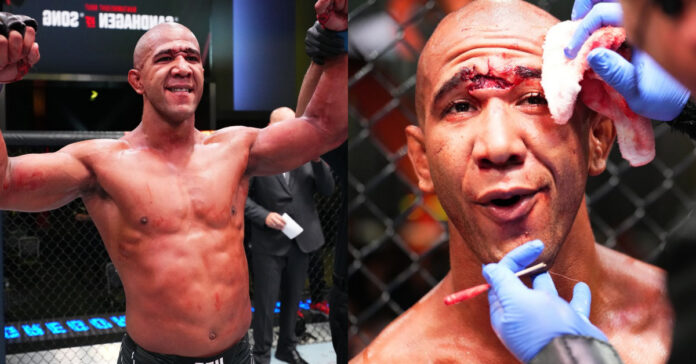 Gregory Rodrigues pulled off an incredible comeback against Chidi Njokuani after an early setback.

This past Saturday, Rodrigues took on Njokuani in the co-main event of UFC Vegas 60. He went into the bout looking to add another win after defeating Julian Marquez in June. Njokuani got off to a solid start and opened a nasty cut on the bridge of Rodrigues’ nose early in the contest. But ‘RoboCop’ did well to recover and managed to score a finish over Njokuani with ground-and-pound in the second round.

Gregory Rodrigues opens up on UFC comeback: ‘My wife is just a little mad’

During the post-fight press conference at UFC Fight Night 210, Rodrigues appeared to be in high spirits while talking about the gruesome injury.

“I [have] three eyebrows,” Rodrigues said via MMA Fighting. “The cut was bad, but the win came and that’s worth it. I’m so happy. I expected a fight like that. We are inside the UFC. That’s the World Cup. The best fighters are here, and I’m one of them. So I’m just happy and grateful for everything that’s happened now in my life.

“My wife is just a little mad, ‘Tell the doctor to do a great job. I will come back there,’” Rodrigues added with a laugh. “But he did a great job, man, so I will look OK.”

Rodrigues shared what was going through his mind

When Gregory Rodrigues got rocked, it looked like the fight might be over. However, Rodrigues not only got back, but he also went on to beat Njokuani. He gave his take on how he found renewed strength with some motivational words from his corner.

“When I finished the first round and came back to my corner, I was worried about the cut,” Rodrigues continued. “My corner was like, ‘Let’s move, let’s start touching him. He already felt your hands.’ Then when it started the second round, he started to do the same, tried to pressure me, but I said, ‘I need to pressure him more.’ And one part of the fight, I felt he was tired. I felt his breath and it was different, and I said, ‘Oh man, I’m here. I’m the Robocop and I’m going to kill you,’ and I started to feel him.

“So when I grabbed him against the cage for the clinch, I felt his body was a little weak, so I took him down and said, ‘I’m going to finish the fight.’ And I did. It was a big war. I love that fight. I need to watch that again, and it’s going to teach me a lot of stuff.”

What do you make of the insane comeback by Gregory Rodrigues?