LowKickMMA.com
Home UFC News Gregor Gillespie Explains Why It Was Easy To Get Over His KO... 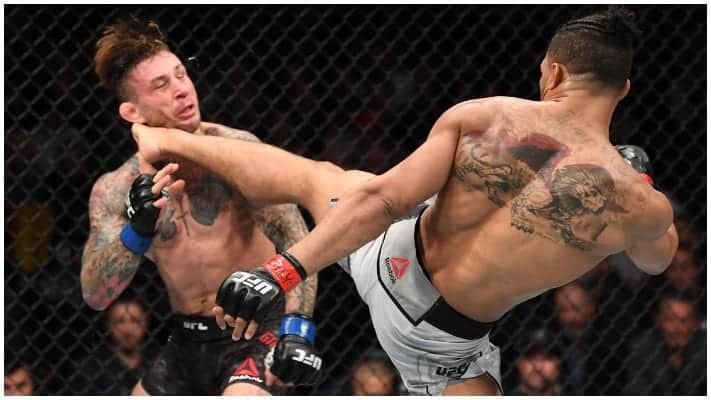 Gregor Gillespie has claimed he was able to quickly get over his knockout loss to Kevin Lee.

Gillespie hasn’t fought since getting viciously KO’d by Lee at UFC 244 in November 2019.

The 34-year-old will return to the Octagon for the first time when he faces Brad Riddell at UFC Vegas 22.

At the UFC Vegas 22 pre-fight press conference, Gillespie explained why he had a fairly easy time recovering from his first career loss.

“It’s been behind me — a few weeks following that loss it was behind me,” Gillespie said of the knockout loss to Lee. “And I want to say this, too, the way I lost was easier to accept for me. And people may be like, what is he talking about? But that was easier for me to accept than getting beat up for three rounds, or getting taken down and held down. Or, you know, like if I had been drug through the mud and then lost a bad decision that would have hurt me way more.

“I got hit by a really nice punch followed by a really clean kick,” Gillespie continued. “And props to Kevin Lee on that, it was a beautiful combo. And I don’t know if you could do it better than that. It wasn’t lucky, it wasn’t ‘I got caught,’ it was perfectly executed and the credit is to him on that. It wasn’t like, ‘Man I had an off night.’ No, it was really solid on his end.” (Transcribed by MMA Mania)

Prior to his loss to Lee, Gillespie seemed like a potential lightweight contender. ‘The Gift’ had won six straight UFC fights since joining the organization in September 2016. These wins included stopping Yancy Medeiros and Vinc Pichel.

Do you think Gregor Gillespie will get back to winning ways at UFC Vegas 22?