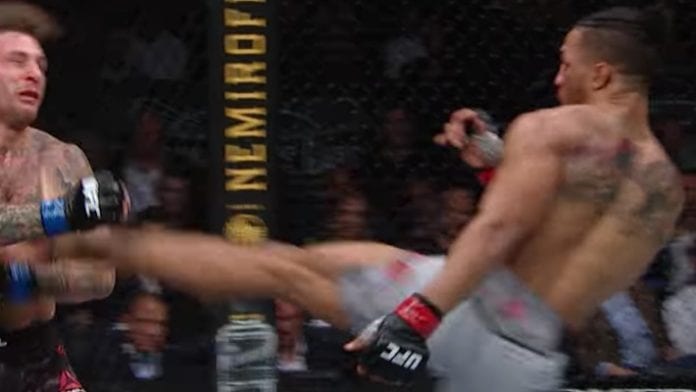 Kevin Lee will look to build a winning run this weekend.

Lee takes on the always dangerous Charles Oliveira in the UFC Brasilia headliner on Saturday. In Oliveira, “The Motown Phenom” takes on a jiu-jitsu black belt with top-tier striking and a six-fight winning streak on enemy territory.

But with more risk comes more reward as victory could put him right back into lightweight title contention. Lee is no stranger to taking risky fights, after all.

Following a two-fight losing streak, Lee returned to the lightweight division in November when he took on previously undefeated wrestler Gregor Gillespie at UFC 244.

Lee, himself, said it was the “dumbest fight” he could have taken.

“To be honest with you, this is the dumbest fight I could’ve took,” Lee said. “A guy who’s incredibly tough, he can take a hell of a shot, he can keep coming forward, and he can make a fight really boring, he can make it really frustrating for you.

“And he’s got a hell of a gas tank, too. So, this is the most dangerous fight I could’ve took. It really don’t make much sense, but I love a challenge, I love doing sh*t like this.”

However, under the tutelage of Firas Zahabi at Tristar Gym, Lee was able to pull off one of the most devastating head kick knockouts in UFC history.

The Detroit native also made a statement to the rest of the division in the process.

You can relive the knockout below:

Do you think Lee will make it two wins in a row at UFC Brasilia this weekend?