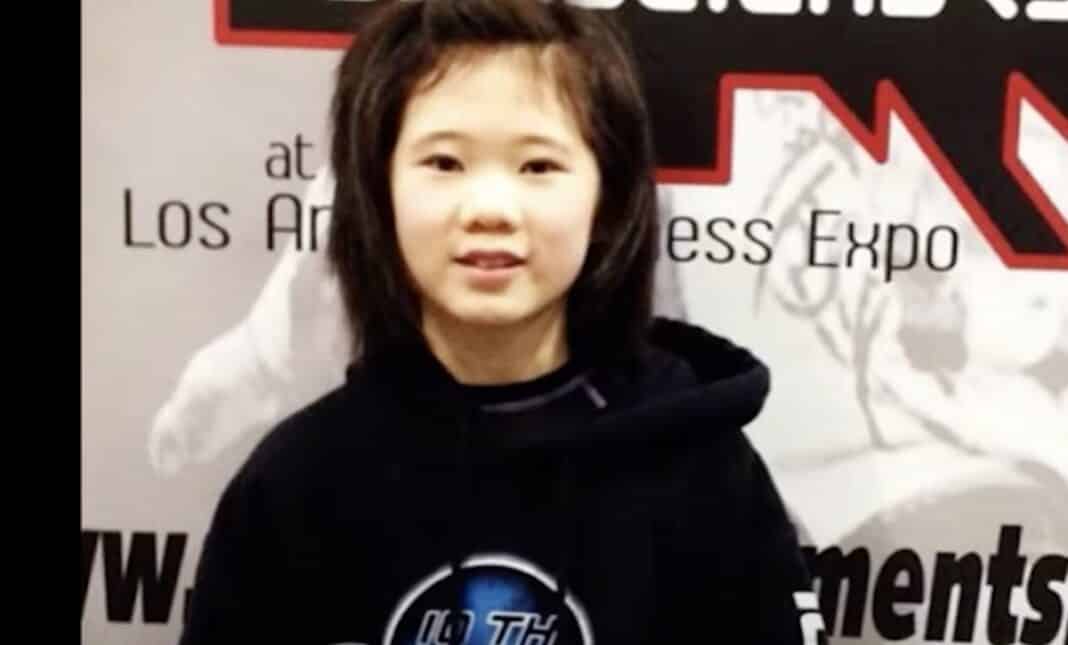 Grace Gundrum is the daughter of Chinese natives that immigrated to the US when she was an infant. She grew up in Bethlehem, Pennsylvania and was a very active kid.

So Grace decided to accept the credits and began participating in the small grappling classes. Grace Gundrum quickly developed a passion for grappling and was the thing she loved doing most.

Her first Jiu Jitsu coach was Robert Villafane along with his top students JM Holland and Zach Maslany. Grace would eventually switch her attention fully on Jiu Jitsu and continue training with Villafante for 6 more years.

When Grace Gundrum was 10, her coaches Maslany and Holland decided to open their own Jiu Jitsu school. Since Gundrum mainly trained under them, she would follow them to their new school.

The two became a 10th Planet affiliate school and would open 10th Planet Bethlehem. This new partnership with 10th Planet would help develop Grace Gundrum’s game to another level.

Nobody in Jiu Jitsu had no idea what she had in store for the scene in the coming years.

Grace Gundrum dominates as a teen

Once Grace started training at 10th Planet Bethlehem, she began to take her training more seriously. She would compete at the majority of No-Gi tournaments on the east coast.

Grace was already levels above the other competitors in the kids divisions, so she began competing in the adult divisions. Before she was even a teenager, Gundrum was beating adult women. Many that were training almost as long as she had been alive.

10th Planet owner Eddie Bravo took notice of her talent and would make her an offer. At just 12 years old, she competed in her first adult super fight at EBI 3.

Easily submitted her opponent and won her next super fights at EBI 4, 6, and 7. Also all by submission.

After winning numerous high profile matches, Grace Gundrum was given the nickname “the silent assassin.” This was due to her being very shy and didn’t talk much.

Interviewers are lucky if they can get more than a few words out of her. As Eddie Bravo put it best, “she prefers to let her Jiu Jitsu do the talking.”

Her popularity was increasing rapidly and had a growing fanbase.

Once the silent assassin turned 16, she would earn her blue belt in Jiu Jitsu. Also during this year, she took up freestyle wrestling to help improve her Jiu Jitsu.

Just like in Jiu Jitsu, Grace Gundrum would excel at wrestling competitions. Reaching the All-American level and placing third at the Junior Women’s World Team Trials in only 1 year of competing.

The biggest Jiu Jitsu tournament that she would enter this year in 2018 was the Onnit Invitational. She was the favorite at this tournament and would again walk through her competition.

Using her patented dead orchard armbar and deadly guard to win the championship and prize money.

Up until 2019, Grace had never lost a grappling match from the time she was 12 years old going undefeated. At Quintet 3, she would face her toughness challenges as during her time in the colored belts.

Grace was part of team 10th Planet in the first all female team tournament that Quintet had run. Her first opponent was 8-5 MMA fighter Hikaru Aono, who was competing for Team Deep Jewels.

In her opening match, the silent assassin almost landed the patented 10th Planet twister. Unfortunately, she just missed it and the match would end in a draw as time expired.

Her last match in the tournament finals was against 4x BJJ world champion Rikako Yuasa. The two would have arguably the match of the tournament as both were constantly attacking submissions.

This match would also end in a draw, but Team 10th Planet would win the Quintet 3 tournament.

After Quintet 3, Grace received her purple from her coaches Maslany and Holland in April of 2019. Then promoted to brown belt just 7 months later in November.

Then in July of 2020, she was given her black belt by Eddie Bravo just 2 months after turning 18. Becoming the youngest 10th Planet Black Belt ever and the fastest to reach the rank.

Also the 2nd youngest female to earn her black belt only a short time behind Brazilian Patricia Lage. She had already been an elite black belt competitor for years, but her coaches waited til she was 18.

Now Grace Gundrum was officially a BJJ black belt and ready to take on the best in the world.

Grace would make her black belt debut at FTW 155 against multiple-time No-Gi world champion Pati Fontes. She would continue her winning ways, submitting the former world champion with an armbar.

Gundrum would then suffer the first loss in 9 years when she faced world champion Mayssa Bastos at WNO 5. Bastos would use her high pressure game to control Grace on the ground and cancel out her guard game.

The silent assassin would bounce back from the loss by arm locking Alex Ngyuen at WNO 8. Then she would get invited to the WNO women’s championship tournament.

This tournament included the who’s who of the world’s best No-Gi female competitors. From Mayssa Bastos, Danielle Kelly, Jessa Khan, and of course Grace.

Grace Gundrum would meet Danielle Kelly in the opening round and earn a decision win over her. Then in her semi final match, she hit the patented 10th Planet twister on Jessa Khan.

That win would set her up in a rematch against Mayssa Bastos. The only competitor to beat Grace in over a decade.

Unfortunately for the silent assassin, Bastos would earn a referee’s decision over Grace Gundrum and win the tournament championship.

Before she has turned 21, Grace “the silent assassin” Gundrum has accomplished more than most competitors have in their career. Going an astounding 34-0-2 as a colored belt and beating numerous world champions before she was 18 years old.

Along with being an elite grappler, Grace Gundrum has excelled at academics. Currently pursuing a computer science degree when she isn’t on the mat training.

Grace’s passion for Jiu Jitsu is unmatched and is one of the most special talents of this generation. Her story in Jiu Jitsu is just getting started and we can expect her to accomplish a lot more.