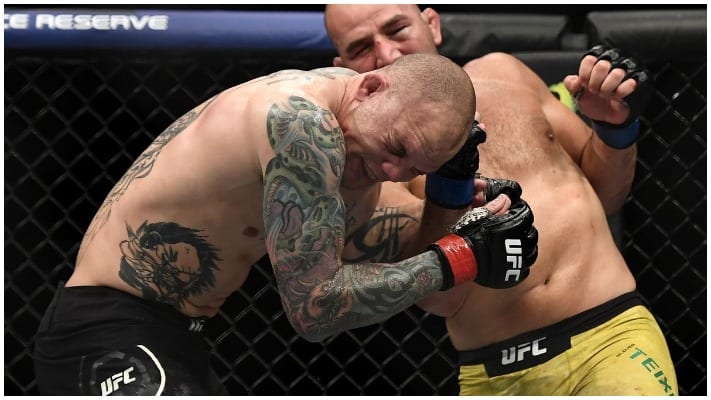 Many fans cringed at the damage Anthony Smith took at the hands of Glover Teixeira at UFC Jacksonville last week. Even Teixeira was a little bothered by it.

Teixeira made it four wins in a row following his fifth-round TKO win over Smith. In the process, “Lionheart” lost some teeth, suffered a broken nose, broken orbital as well as a cut under his eye.

However, the fight could have been stopped much earlier especially given the damage the Brazilian inflicted on Smith over the course of three rounds.

Some laid blame on referee Jason Herzog — who has since apologized for the late stoppage — while others believe Smith’s corner was at fault for not throwing in the towel earlier.

Teixeira: This Never Happened To Me Before

Regardless of who was at fault, the damage inflicted on Smith left a sour taste in Teixeira’s mouth.

“When he handed his own tooth to the referee and said: ‘Here, hold my tooth.’, I thought he was going to give up or that he was injured,” Teixeira said in an interview with Ag Fight (via Bloody Elbow). “I was baffled and stopped to see what that was all about. Then he handed the tooth over and I apologized to him, I told him it was part of the job. He told me ‘It is what it is’. He was still in the fight, so I kept trying to finish the fight.

What do you make of Teixeira’s response?