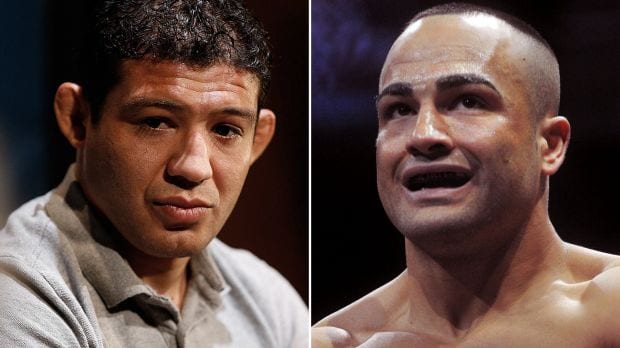 A few months ago, former title challenger and No. 4-ranked lightweight Gilbert “El Nino” Melendez appeared on an edition of the MMA Hour to discuss his future plans. The former Strikeforce champion expressed his desire to fight former Bellator champ and No. 10-ranked Eddie Alvarez.

The idea of a Strikeforce vs. Bellator “super fight” between the two was tossed around years back, but it never came to fruition. However, now that both are competing under the UFC banner, it seems as if Melendez will get his wish. The UFC announced today (February 23, 2015) that the two will meet at UFC 188 on June 13, 2015 in Mexico City:

It’s a matchup fight fans have wanted to see for years, and on Saturday, June 13, the lightweight clash between Eddie Alvarez and Gilbert “El Nino” Melendez will finally become a reality, as the two meet in the co-main event of UFC 188 in Mexico City, Mexico.

Melendez is actually only 1-2 in the UFC since jumping over from Strikeforce, but two of his defeats have been in title fights. “El Nino” made his Octagon debut back in 2013 at UFC on FOX 7, losing a very controversial split-decision to then champion Benson Henderson, in which many thought he won. He then bounced back to score a unanimous decision win over Diego Sanchez at UFC 166, a fight that was deemed a “Fight of the Year” candidate.

Most recently, Melendez suffered a submission loss to current champion Anthony Pettis at UFC 181 last December. He is undoubtedly hungry to get another shot at gold, but will have a tough test in front of him in the Philadelphia native Alvarez.

After a long contract dispute with Bellator, Alvarez finally made his long-awaited Octagon debut at UFC 178 last September, and it was not a pretty one. The former champ was met by the surging Donald “Cowboy” Cerrone who butchered Alvarez’s legs with brutal kicks to earn the decision.

Alvarez was then set to meet former champ Henderson at UFC Fight Night 59 in January, but pulled out due to injury. He will look to prove himself come June.

This is not the only fight set for the Mexico City card, as the UFC also announced earlier today that heavyweight king Cain Velasquez will return in the main event, taking on Fabrico Werdum to unify the heavyweight belts.

UFC 188 is shaping up to be an intriguing card for the promotions second entry into Mexico. Stay tuned to LowKickMMA for more updates as the event nears closer.