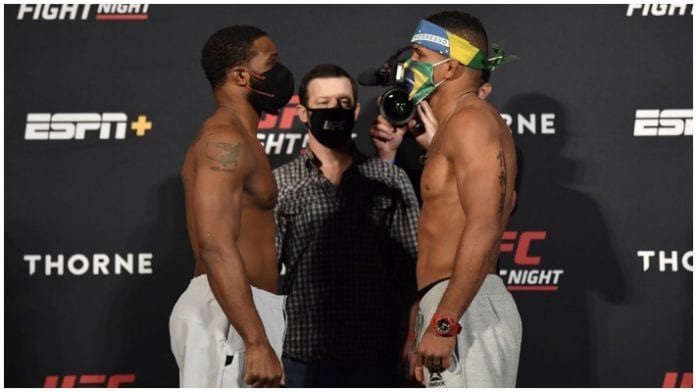 IT’S TIME! Former welterweight champion Tyron Woodley enters the cage for the first time since losing his title against Kamaru Usman last year. ‘The Chosen One’ is hoping to dispatch of Brazilian submission specialist Gilbert Burns on his way to another title shot. Burns won’t be easy to deal with though. ‘Durinho’ is fresh off the biggest win of his career having beat Demian Maia at UFC Brasilia a few months back.

Round 1: Gilbert Burns races to the center of the octagon. The Brazilian is throwing lots of feints. Tyron Woodley throws a big overhand right that misses. The fighters clinch up and Burns appears to have landed something big! He swarms Woodley who drops to the floor and starts unleashing shots. Herb Dean looks like he’s about to step in but Woodley moves to get out of trouble and the fight continues. Burns is in top position with so much time on the clock. He’s hitting ground and pound and working for submissions. He enjoys three minutes of top time before Woodley explodes back to his feet. ‘The Chosen One’ with impressive survival skills but he’s cut badly around the eye. He’s tentative and backing up to the fence eating leg kicks and trying to avoid the heavy hands of the Brazilian as the round ends.

Round 2: Woodley explodes at the start of round two. He looks better already throwing his trademark overhand. ‘Durinho’ continues to pressure and has the former champion with his back to the fence as we often see him. Both men clearly respect the other man’s power. They are tentative to throw at the minute and are feinting a lot. Woodley throws a big overhand right but Burns ducks under it and lands the takedown – his first of the fight. Burns is throwing lots of little shots at Woodley who is trying to use the cage to work his way back to the feet. He’s up but is yet to break free from the clinch. Burns is throwing little shots on the inside and controlling the fight against the fence. Woodley reverses position and lands a few body shots. The round draws to a close with Woodley holding Burns against the fence.

Round 3: Another quiet opening to the round. Both fighters hesitating to throw as the opening minute ticks by. Woodley lands a nice straight down the pipe that gets a nod from Burns. Burns returns with a big punch that appears to hurt Woodley who does well to shake it off. Burns is winging in punches and Woodley is doing his best to get out the way. Lots of moments were not a lot is happening but when they throw both fighters are doing so with bad intentions. The third round is coming to a close and it has been all about the pressure from Burns who is not landing a lot but is forcing his opponent against the fence and controlling the action.

Round 4: Woodley has been told by his corner he needs a finish to win this fight but it is Burns who comes out quicker. Woodley throws an overhand and Burns immediately shoots at the legs. It’s deep but Woodley does really well to defend. He pushes Burns back to the fence and is controlling his man before ultimately being reversed. Woodley gets back control but Herb Dean separates the fighters as nothing is going on right now. Burns goes back to putting big pressure on his opponent. He steps in and explodes on Woodley with a number of punches. The former champ momentarily drops to the mat but bounces back up and initiates the clinch. He gets reversed and then taken down – Burns’ second of the fight. In half guard, Burns is busy throwing ground strikes and working for submissions. He grabs for the neck and rolls Woodley in a choke attempt but the round ends and saves Woodley.

Round 5: Woodley knows he needs a knock out and has opened up in the final round missing with two big shots. Burns shoots for a takedown but Woodley defends, the Brazilian settles for control against the fence. Three minutes left and not a lot is happening the fight is slowly getting away from ‘T-Wood’. Herb Dean eventually steps in to separate the fighters. Burns is still in the face of Woodley and eats a big shot for his efforts. He takes it well though and continues with his great work. Woodley jumps in and Burns ducks under again for a takedown attempt before forcing the fight to the cage. Finally Woodley opens up a little in the final 10 seconds of the fight but it’s not enough- he’s been dominated by Burns.