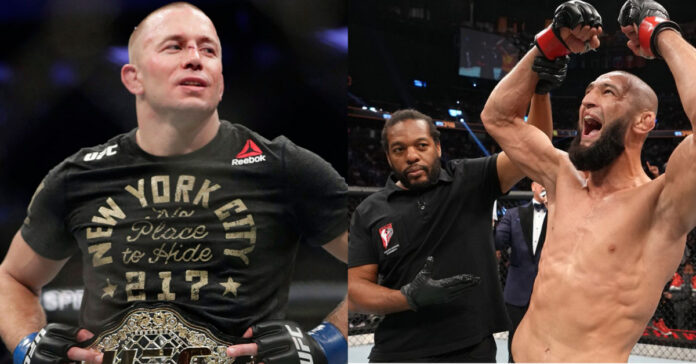 Chimaev is coming off an impressive win over Kevin Holland. He was originally set to face Nate Diaz but needed to change opponents after coming in seven and a half pounds over the agreed weight limit. “Borz” earned another first-round finish without taking any damage in the fight.

In an interview with The Schmo, former UFC welterweight champion Georges St-Pierre criticized Chimaev for coming in overweight.

“He needs to make weight,” St-Pierre said via MMA Fighting. “When you miss weight it’s a big disrespect not only to your opponent but to the sport. But we don’t know what happened. Maybe there’s a reason, maybe there’s a medical reason or something, so when you don’t know, you don’t know. But for sure, in the future, if he misses weight another time, maybe that will prevent him from having a title shot.

“Maybe give him the chance to go back at 170 if he wants to, but he can’t miss weight. Missing weight, it’s hard to forgive. As a fan, I would like to see Kamaru Usman get revenge [for the next title fight] because if anyone deserves it, it’s him. Maybe perhaps Chimaev has a shot against the winner of this fight [with Leon Edwards].”

UFC 279 marked the final outing on Diaz’s contract, and the Stockton native is now free to explore options as a free agent. GSP praised Diaz for going out on a high note, with a win over Tony Ferguson.

“I’m very happy for him,” St-Pierre said of Diaz. “He came out on top, beautiful. Whatever he does next, it’s up to him. But he’s got the power to choose what he wants to do and he’s gonna be paid accordingly. You need to be smart in this business and what I’m saying to the young fighters, it’s that you should retire from the sport, not let the sport retire you.”