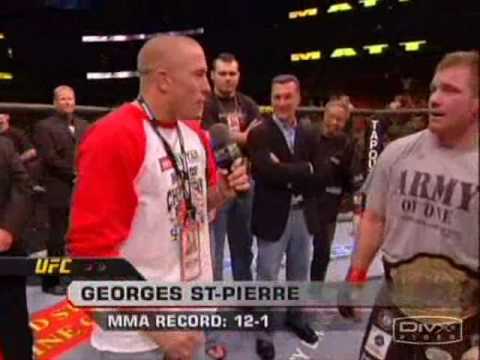 “GSP” famously penned the phrase when he stepped into the octagon after Matt Hughes’ title defense at UFC 63 in 2006. “Rush” earned another shot at the legend’s belt and capitalized the second time around, knocking Hughes out with a head kick and punches to begin one of the most decorated reigns in UFC history.

It was an instance of surprising trash talk that will be remembered forever, but that doesn’t necessarily mean that St. Pierre is proud of it. Now the subject of a Fightography documentary on UFC Fight Pass, St. Pierre spoke up about the infamous incident:

GSP deemed his behavior “low-class,” noting that it wasn’t normally his style to steal another fighter’s thunder:

“It’s not my style to go in, and it was very low-class from my part to go in there and ruin his celebration. Dana White is like, ‘Hey, come in the ring! Come in the ring! I thought he was talking smack about me. Now I look at it, and it makes me laugh.”

Highly regarded as one of the classiest athletes to ever fight for the UFC, St. Pierre even went out of his way to mend a bridge he broke a very long time ago.

Hughes has been critical of St. Pierre ever since, but most attributed that to bad blood given that GSP took over his lofty spot. While Hughes’ time at the top is done, White still believes that “Rush” will return to the UFC sometime in 2015. It’s no surprise that St. Pierre would get an immediate title shot if he did, and this time it would be against Hughes’ Miletich Fighting Systems teammate and student Robbie Lawler.

So while St. Pierre’s trash-talking days against the Bettendorf career may be over, his fighting days may not. Will we somehow witness the dream match-up of St. Pierre vs. Lawler this year?