LowKickMMA.com
Home UFC News Mateusz Gamrot Discusses Friendship with Joanna Jędrzejczyk; ‘I Wish Her All The... 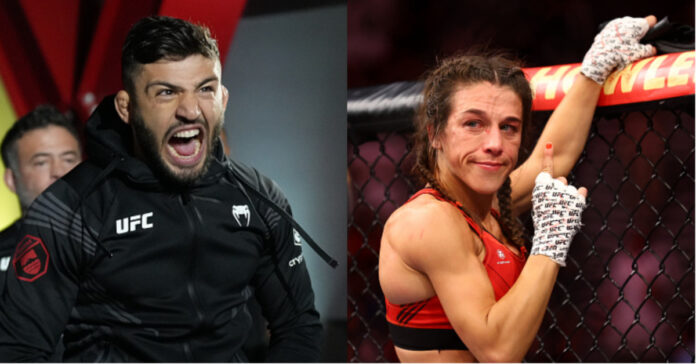 At UFC 185, Jędrzejczyk captured the UFC strawweight championship, defeating then and current champion Carla Esparza by second-round TKO. The win made Jędrzejczyk the first Polish-born fighter to become a UFC champion. Fellow countryman and friend Mateusz Gamrot was successful in his UFC Vegas 57 main event against Arman Tsarukyan on Saturday.

Following his victory, Gamrot spoke about his friendship with Joanna Jędrzejczyk during the post-fight press conference.

“Joanna is my really good friend,” said Gamrot. “She helped me a lot when I signed a contract with UFC. She helped me a lot every single day. She gave me a lot of motivation and now I am so happy that she’s going to retire because I think she deserves that. She deserves everything beautiful in life.”

Debuting in 2014, Jędrzejczyk won back-to-back bouts against Juliana Lima and Claudia Gadelha to secure a title opportunity against Esparza. Jędrzejczyk would go on to defend her title five times before losing to ‘Thug’ Rose Namajunas at UFC 217.

“She was a superstar in the UFC for many years,” said Gamrot. “She was five, six times in the world champions. She did everything in the UFC, but she’s a true warrior. She’s a true fighter, she’s strong mentally, but I wish her all the best in life. Doesn’t matter what she wants to do in life, I’ll keep my fingers [crossed] and for sure, I’m gonna support her.”

Jędrzejczyk would go on to lose five of her last seven bouts, though the losses came against some seriously tough competition in Namajunas, Zhang, and current flyweight champion Valentina Shevchenko. At UFC 248, Jędrzejczyk faced Zhang in a bout that many pundits believe is the greatest women’s mixed martial arts fight of all time. Zhang would win via a closely contested split decision.

Following the loss at UFC 275, Jędrzejczyk announced her retirement while speaking with Daniel Cormier.

“Guys, I love life so much,” Jedrzejczyk said. “I’m retired, guys. I love you so much. Thank you for the support.”