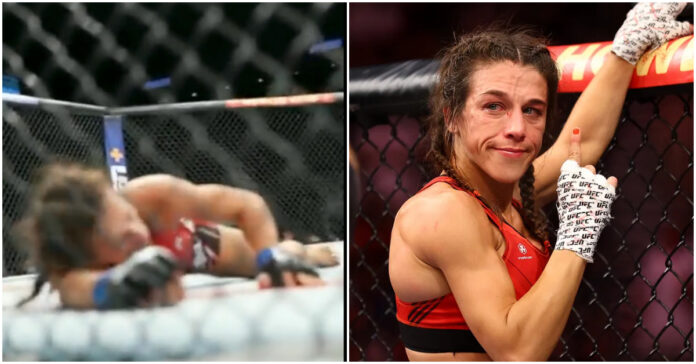 Weili Zhang came out on top in her highly anticipated rematch with Joanna Jedrzejczyk.

This past weekend, Weili Zhang ran back her bout with Joanna Jedrzejczyk at UFC 275. Jedrzejczyk was marking her return to action after a two-year hiatus since last competing against Weili in March 2020.

Their first contest made for an incredible showing and was awarded The Fight of the Year. It also broke the record for the most significant strikes landed (combined) in a women’s UFC fight. Although Weili won the bout by a split decision, fans were clamoring to have the pair go at it again in one of the most highly awaited rematches.

As for their second outing, the two ladies got off to a fiery start with both going in for the kill. Weili would eventually connect with a brutal spinning back fist elbow to knock out Jedrejczyk halfway through round two. There were videos of the highlight reel finish going around online but there’s footage from a different angle that popped up recently.

In the video, shot cage side, the brutal knockout can be seen from a more intimate look as Jedrejczyk crashed down to the canvas and the focus stayed on her.

The former UFC women’s Strawweight champion Joanna Jedrzejczyk left her gloves inside the octagon to signal her retirement. During the post-fight press conference, she would announce an end to one of the most legendary careers in MMA.

Jedrzejczyk is an icon in Poland and has greatly helped advance women’s MMA. Having won the promotional gold in just her third outing, she also defended it five times in a row.

In a professional career spanning a decade, Jedrzejczyk leaves the sport with a record of 16-5 with her only losses coming to fellow strawweight champions Rose Namajunas and Weili Zhang, and to the reigning UFC women’s Flyweight queen Valentina Shevchenko.