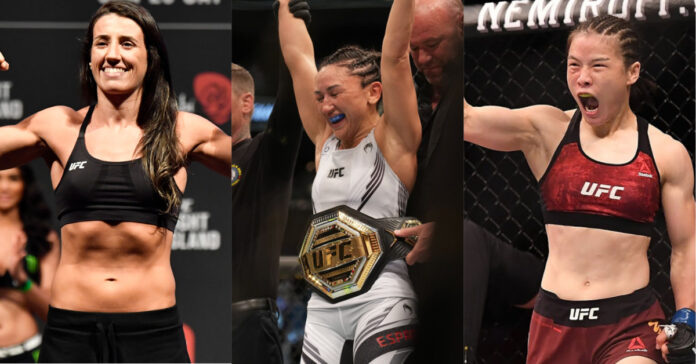 Following her sensational rematch win over Joanna Jedrzejczyk, former champion Zhang Weili called for and was anointed the number one contender spot. However, the current champion, Carla Esparza believes that Marina Rodriguez, a former opponent, is more deserving of a title shot.

“I don’t think [Zhang] is [more deserving],” Esparza said to MMA Fighting. “I think that Marina has won five straight, I think she’s beaten top-level competition. She’s been staying active, and for me, she’s proven herself. She deserves a title shot. But for whatever reason, I’m sure there’s a lot that goes into it and Weili is getting the shot.”

Rodriguez is currently riding a four-fight win streak after being defeated by Esparza in August of 2020. The Brazilian has produced some great wins over the likes of Mackenzie Dern, Michelle Waterson, and Amanda Ribas.

Although Esparza feels that Rodriguez Is the most deserving and recognizes the improvements in her game, she isn’t fazed about who’s put in front of her even if she feels it isn’t the deserving opponent.

“For me, I fight whoever’s put in front of me,  Esparza said. But doesn’t necessarily mean I think it’s fair or was the right call as far as the athlete goes. Every time I watch Marina, I see her getting better and better and beating top girls. Even having to knock somebody out twice in one fight in Amanda Ribas. She’s impressive.

“I definitely think she earned the title fight, and this is just the way it goes with the UFC sometimes. Whether it’s marketing or whatever else the reasoning, that’s just kind of how it goes, and you have to just roll with the punches.”

Although there is no set date for Esparza’s first title defense of her second reign as champion, it will undoubtedly be with either Zhang Weili or Marina Rodriguez. Of the other top five, Esparza is just fresh off a win over Rose Namajunas [No.1], with Dana White shutting down talks of a third fight between them.

As for Mackenzie Dern [No.4] and Yan Xianan [No.5], Rodriguez has beaten both back-to-back in the past eight months.

Do you agree with Carla Esparza? Does Marina Rodriguez deserve the next shot