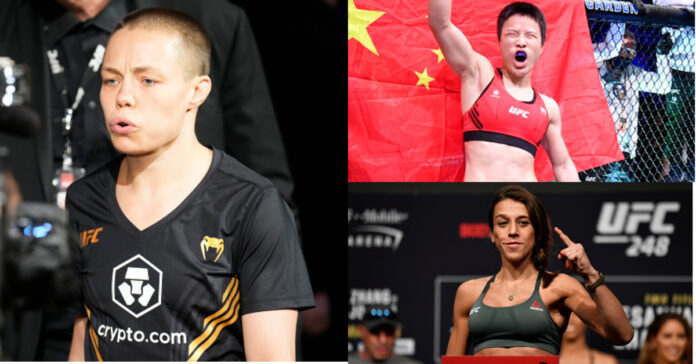 27 months removed from their first bout, Joanna Jedrzejczyk and Weili Zhang will run back what many consider to be the greatest women’s fight in mixed martial arts history. At UFC 248, Jedrzejczyk and Zhang engaged in a 25-minute war that left Jedrzejczyk nearly unrecognizable. The two are expected to light the fireworks once again in Singapore, but before Jedrzejczyk steps back into the Octagon, she might get some help from a former foe.

‘Thug Rose” and her coach Pat Barry confirmed during an appearance on The MMA Hour that they were willing to help Jedrzejczyk prepare for her UFC return. The offer caught the attention of former champion Zhang who was nothing short of confused by Namajunas’ offer during an interview posted on the Chinese-native’s Instagram account.

“Well, if I’m Rose, I would not do something like this because Joanna has her own team. ATT is a very professional, elite team. They produced many champions,” Zhang said. “And you go interfere at this point that’s a little bit… I don’t know what she’s trying to do. Does she think Joanna’s team is not good enough or what? I don’t know. I definitely would not do that in her shoes.”

Fighters reaching out to help train others is certainly not unheard of and when it comes to bouts with Weili Zhang and Joanna Jedrzejczyk, you’d be hard-pressed to find someone more qualified than Namajunas.

Stepping into UFC 217, Namajunas was a sizeable underdog against then-champion Jedrzejczyk. It only took ‘Thug’ Rose three minutes to put away the reigning champion. While some fans suggested that her win was a ‘fluke’, Namajunas proved her worth by defeating Jedrzejczyk in a rematch at UFC 223.

History repeated itself when Namajunas stepped into the cage against champion Weili Zhang at UFC 261. Namajunas landed a massive head kick just over a minute into the contest to capture UFC gold for the second time. She followed up the performance with a split decision win over Zhang in their UFC 268 rematch.