LowKickMMA.com
Home UFC News Frankie Edgar reveals why he is retiring after UFC 281: “I feel... 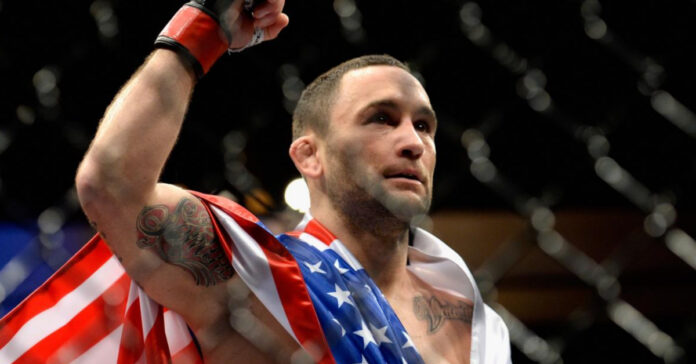 Former UFC champion Frankie Edgar will call it a career after a legendary 15-year run in the promotion.

Frankie Edgar is set to take on fellow 135lber Chris Gutierrez at UFC 281 in Madison Square Garden in what will be the final bout of the 41-year-olds career.

Competing from lightweight to bantamweight, Frankie Edgar has taken on and beaten some of the who’s who of the lighter weight classes but now over 17 years since his professional debut he knows it is the right time. Talking to MMAFighting, Edgar revealed that it was time to spend more time with his family.

“It’s a lot of things I would think,” Edgar told MMA Fighting. “Kind of the way my fights have been going as of late led to that as well. My body, I am getting older. I feel great. In camp, I’m such a strong minded person that I always have great camps. I always feel good but the body takes its toll throughout the years and I just want to move on and see what’s next.

“I know I can’t fight forever. I could definitely string it on a couple more years probably but I know I’ll never move onto what’s the next chapter in my life. I think now I’m being selfish when I’m still trying to chase this and I’ve got a family and kids that want to have goals of their own. They want me around and probably want me to be able to speak good and have my wits about me. I just now is probably the best time.”

Edgar was also honest about the potential head injuries that can come with competing in sport like MMA but says that he feels no ill effects.

“It’s definitely in the back of your mind,” Edgar said. “You can’t help but hear talks of that in sports and especially in our sport but across all sports. It’s not like I notice anything like oh man, I’m forgetful or I’m slurring my words but I don’t know if that’s how it works. Does it happen one day, you wake up and you’re messed up or does it happen gradually? Who knows.

“I’m going to be 41 next week and I feel like I’m somewhat coherent, maybe not the most, but I guess good enough for now so maybe leave well enough alone.” (H/T MMAFighting)

Edgar captured the UFC lightweight title in 2010 when he beat then-champion B.J. Penn, a belt he would defend three times. ‘The Answer’ has defeated the likes of Urijah Hall, Gray Maynard, Sean Sherk and Yair Rodriguez.

What is your favrioute Frankie Edgar moment?