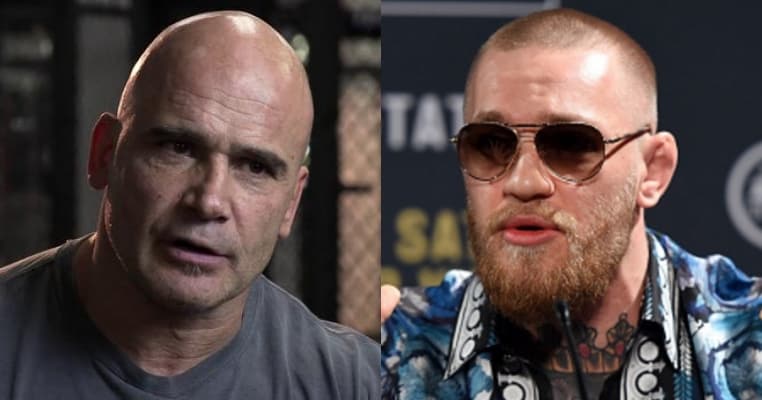 In the weeks following UFC featherweight champion Conor McGregor‘s close majority decision win over Nate Diaz at welterweight in the main event of August 20’s UFC 202, “The Notorious” has been linked to a variety of high-profile bouts for his next attraction.

Those include potentially lucrative fights against supposedly returning former welterweight champ Georges St-Pierre and current lightweight champ Eddie Alvarez, but one MMA legend agrees with the many who think McGregor should finally defend his 145-pound title. Speaking during a recent interview with Submission Radio, former UFC heavyweight champion Bas Rutten revealed his stance that McGregor should finally give Jose Aldo, whom he knocked out in 13 seconds to win the belt, his long overdue rematch:

“No, they cannot do it – well they can do it if they want, but that’s not going to be well received. I would say what you said, give up the title, then step away from it and go for the title shot at 155. That I can see happening. But both? No. I think there’s going to be a backlash. I think people are gonna speak up.”

“He needs to defend his title now against Jose Aldo. That’s first. He should have done that before already, I believe. So now he’s going to have to go back to 145, defend his title, then decide.”

As for the rumored fight with GSP, Rutten was brutally honest in his assessment of how it would play out, which made the fight one he is not interesting in seeing. “El Guapo” would be more interested in seeing St-Pierre face top welterweight contender Stephen Thompson:

“Nah. I rather see GSP against somebody with better takedown defense, because we know what’s going to happen – and even if you have great takedown defense, it’s still going to be hard not to be taken down by GSP. We know what’s going to happen, he’s (Georges St-Pierre) going to take him down and then be on top of him. I don’t know if that’s going to be an exciting fight, you know, the whole time he’s on top. I don’t know if he can finish him once he has him on the ground, so I don’t know. Rather see him against Wonderboy or something like that. I think that would be a really good fight – GSP I’m talking about.”

It may be a bit blunt, yet it’s an honest assessment of the situation, as fans new to MMA may think McGregor owns a decided edge on the long-absent St-Pierre while in truth the all-time legend would have a huge edge on McGregor in the wrestling department – his main perceived area of weakness.

Many fans and media members are calling for McGregor to either give Aldo the second chance at redemption he earned by beating Frankie Edgar for the interim featherweight belt at UFC 200, or vacate that title to go on and contend for a second belt up a weight class.

The fight with St-Pierre will always be there, too, and it could truly contend for the title of the biggest fight in UFC history, at least in terms of pay-per-view sales and live gate. The outcome, however, may be a bit of a letdown if anything close to Rutten’s prediction were to come true.