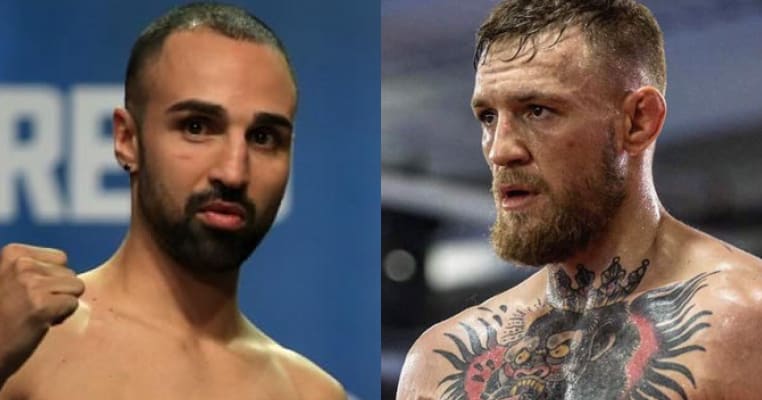 Days after former boxing champ Paulie Malignaggi and Conor McGregor met in a highly-publicized sparring session at the UFC Performance Institute in as Vegas, Nevada, Malignaggi has apparently left the McGregor camp after a late night rant against his now-former training partner.

After the session reportedly got a bit ‘out of control’ according to Joe Cortez, the referee brought in to oversee the action, Malignaggi posted on Twitter that some of the pictures of the session posted on social media were misrepresented, especially one that made him look like he had been dropped to the ground when he was allegedly pushed.

Here is the photo in question:

Malignaggi offered his view that he fell down from a push, prodding McGregor and his camp to release the full video of their sparring session:

Its not nice 2 paint a pic that isn't true, this was a pushdown in sparring, post the whole video rounds 1 through 12 UNEDITED https://t.co/R82BLiMMVm

The respected boxer then said he came to McGregor’s camp to help him train to fight Floyd Mayweather, not to be exploited to make him look good:

I came to help this camp out, not to be exploited, now your gonna get the truth though. Post FULL UNEDITED VIDEO FROM TUES night #Ethics

Malignaggi then tried to set the record completely straight, claiming that he had ‘beat McGregor’s ass’ and wants the full video of the session posted because the time to not be petty is clearly over:

I actually beat his ass, 24 hrsoff a flight 2 lol, which is why Im saying post the vid, I try not 2 be petty but seems it's late 4 that now. https://t.co/vSE2Iw4ffM

And as a code between fighters, professionals usually don’t do interviews about sparring sessions in order to keep what they saw in the gym, but when McGregor began leaking photos that were from his official photographer – the only photographer allowed in the room – he was forced to defend himself:

I did interview BECAUSE of the pics, I'm not ur average sparring partner u post pics with me media will hound me, I've said stop with pics. https://t.co/9c85977PQ5

Malignaggi got a bit testy with a ‘fan’ who blasted him for doing the interview, noting that it wasn’t him who kicked off the media blitz:

It stays in the gym, until the guy you're boxing with keeps making it public u fucking mutt, works both ways use some common sense lol

Malignaggi continued blasting McGregor supporters, telling another to stop ‘inventing his own reality’:

Only his personal photographers allowed in the gym. Don't just invent you're own reality of things because it's how u wish it to be buddy. https://t.co/OsnN2AkL56

Finally, Malignaggi posted a lengthy Instagram response revealing he was officially leaving McGregor’s training camp and would divulge the reasons why later:

So McGregor’s highest profile sparring partner has left his camp 22 days away from the circus-like event in Las Vegas, mainly be cause he didn’t like how he was portrayed in photographs that he believes were engineered to only show McGregor in a favorable light.

With no professional boxing matches on his record, it could be assumed that McGregor needed to puff himself up by only allowing his official photographer in the room and posting only pictures that were favorable to him.

Perhaps Malignaggi got tagged and had his pride hurt a bit too, but as the former boxing champion noted, we’ll never know until they release the full video of the sparring session, and that doesn’t seem like a likely occurrence at this time.