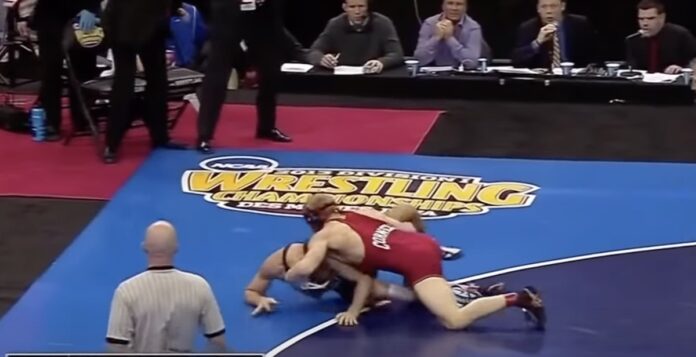 That is why we made this write up going over the sport of folkstyle (collegiate) wrestling. Going over how this style of wrestling was developed and the rules of the sport.

What is folkstyle wrestling?

Every top American MMA fighter with a background in wrestling has participated in this form of wrestling in their lives.

The history of folkstyle wrestling

The development of folkstyle (collegiate wrestling) began 300 years before the style was developed in American universities. European settlers that practiced various types of wrestling settled in North America. Even native Americans practiced their own style of wrestling.

These groups of people would routinely have contests within their settlements.

By the 18th century, many of the best wrestlers from these different styles would begin competing against each other. Creating competitions and agreeing upon different rule sets.

Wrestling was becoming a spectator sport that was among the most popular sports to watch during this time. Even many of the US presidents were accomplished grapplers that practiced early folkstyle and catch wrestling.

By the 1900s, wrestling had become a sport that was quickly growing in cities throughout the US. Especially in the midwest and northeast regions, where they were the most competitive.

In 1903, the first dual meet between Yale and Columbia University was held under an early set of folkstyle rules. After this event, the first college wrestling tournament was held in 1905 by the Eastern Collegiate Wrestling Association.

Soon universities from all over the country began adding wrestling teams at their schools. Then in 1930, there were enough college wrestling teams for the NCAA to hold the first national championship wrestling tournament.

It would become the most popular form of wrestling in the country. High schools and youth wrestling would also adopt the same rulesets that were used in college.

Today, folk style (collegiate wrestling) is still the most popular form of wrestling in the country. Thousands of spectators flock to see the biggest tournaments of the year during wrestling season.

Ways to win in Folkstyle wrestling

The difference between folkstyle and international wrestling styles

To be awarded exposure points in folk wrestling, the rules are different from freestyle wrestling. One shoulder must be on the mat, while the other is forced to the mat at an angle of 45 degrees. This position must be held for 2-5 seconds to be awarded points.

In folkstyle, wrestlers are de-emphasized from doing throws or any type of maneuver where their opponent is lifted off their feet. What is more emphasized is the control and dominance on the mat.

All takedowns in folkstyle no matter how perfect are all 2 points. In Greco or freestyle wrestling, a wrestler could earn 2-5 points depending on how good their takedown was.

To win by pin in folkstyle wrestling, a competitor must hold their opponent’s shoulders to the mat for 2 seconds. In freestyle and Greco Roman wrestling, you only have to hold a pin for one second.

MMA fighters with folkstyle(collegiate) style wrestlers are among the most successful fighters in MMA. They prove that you must have wrestling abilities in order to be successful in the sport.

There have been more collegiate wrestlers that have been MMA champions than fighters of any other background.