Michael Bisping has a flare for the dramatic.

Never was that more clear than in his shocking first-round knockout win over Luke Rockhold in the main event of last Saturday’s (June 4, 2016) UFC 199 from Inglewood, California, where he knocked out heavily favored former champion Luke Rockhold with a jaw-dropping first round sequence.

Bisping has always been a polarizing figure in the UFC, but whether you love him or hate him, there’s no doubt that 2016 has already been his biggest year by far, and it’s come on the heels of two frankly surprising wins over two of the most highly-regarded middleweights in the UFC.

And he’s seemingly made out of a career of doing just that, riding his toughness to buck the odds and come out on top against all odds (even in a loss).

In this list, we take a look at five instances where ‘The Count’ silenced the critics in one way or another. 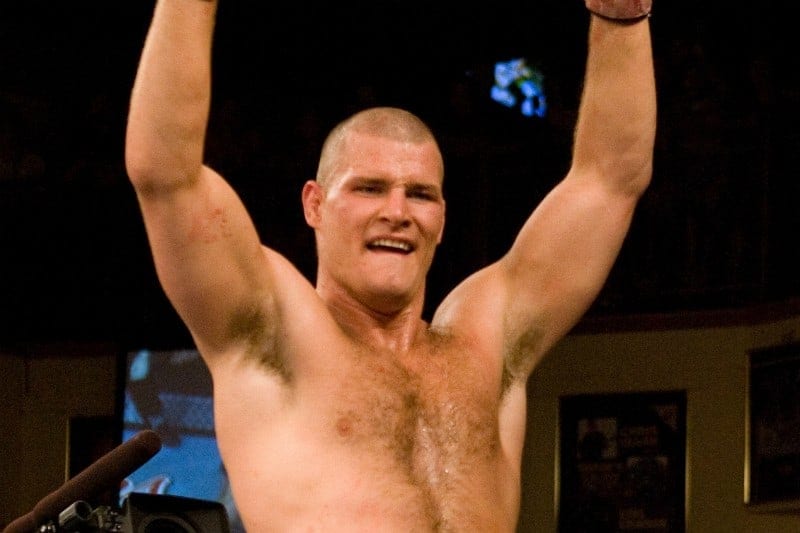 Heading in to The Ultimate Fighter’s third season, Michael Bisping was motivated to represent his home country well, serving as one of the first two UK representatives in the show’s short history.

Bisping came in to the show with an undefeated professional record and a solid reputation, making him a fighter to watch in the competition. The knock on UK competitors at the time, however, was a lack of wrestling ability. Stacked with imposing grapplers, the roster for the light heavyweight tournament seemed to be a tough road for a striker like ‘The Count.’

The Brit proved doubters wrong and ran through the tournament like a man on a mission, finishing all three of his opponents to win the tournament. His victory over Josh Haynes in the finale marked the beginning of Bisping’s 10-year career with the UFC, and the first of many TUF winners from the UK. 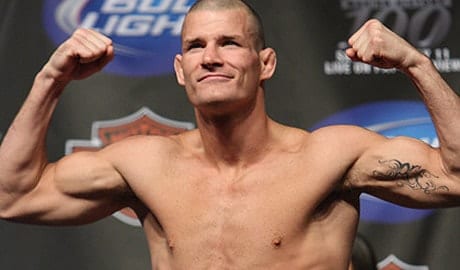 UFC 70 was the first card to take place in the UK since UFC 38 dating back to 2002. Naturally, the UFC put Bisping on the card.

Following Bisping’s demolition of his fellow TUF competitors and his first round thumping of Eric Schafer, the Brit was rewarded with a higher-profile opponent. ‘The Count’ drew former world title competitor and UFC veteran Elvis Sinosic, an Australian ground specialist with a considerable experience advantage.

After a dominant first round by the TUF alumni, Sinosic rallied back in the second, dropping Bisping with a knee before following his hurt foe to the ground and transitioning to a kimura. Bisping, however, regained his bearings and thwarted the submission attempt, reversing the position and unloading a vicious barrage of punches to Sinosic’s head, which forced the referee to stop the fight.

Not only was this fight another display of Bisping’s aggressive ground and pound, but it showed his ability to overcome adversity and take out a seasoned competitor in Sinosic. 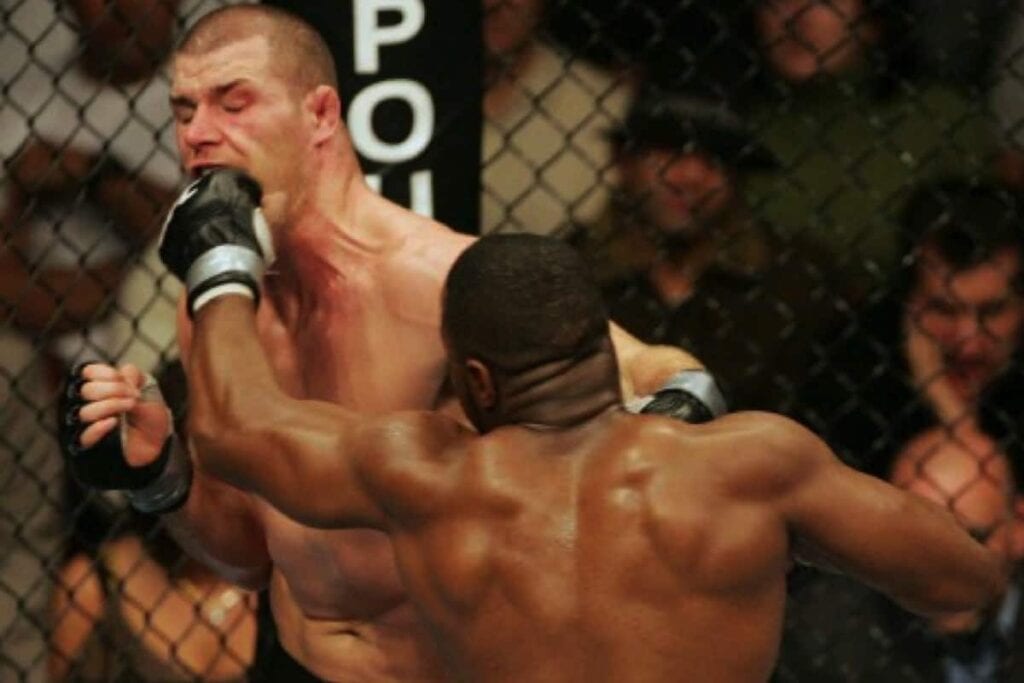 Going into the headlining UFC 78 match-up with the Brit, Evans’ stock was at an all-time high after fighting to a draw with Tito Ortiz in his previous outing. A former heavyweight, Evans’ size and wrestling prowess were expected to give the smaller striker trouble.

As the bout unfolded, Bisping surprised critics by taking ‘Suga’ down on multiple occasions while scoring points and controlling the larger fighter. The fight ultimately went to the judges’ scorecards, resulting in a close split decision loss for Bisping.

Even though the contest marked the first loss in Bisping’s career, he had done so in a close bout against a bigger, more elite fighter, so it announced his arrival as a viable contender and demonstrated his ability to compete with fighters in the top 10.

Following the fight, Bisping moved down to the middleweight division. 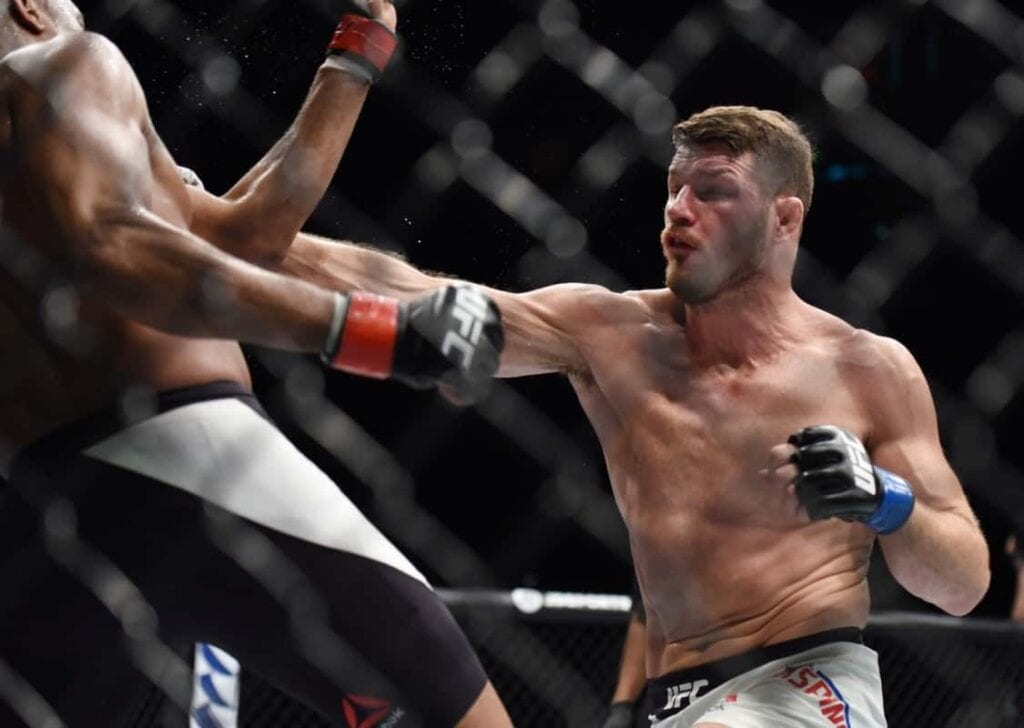 When it was announced, Silva vs. Bisping was the biggest fight to ever hit UFC Fight Pass; additionally, it was also the biggest fight of Bisping’s career. Having been deprived of a shot at UFC gold, Bisping treated the bout with Silva as his title shot.

Although Bisping had never tasted defeat in the UK, legendary former middleweight champion Silva was the considerable favorite going into the fight in London.

Bisping made the most of his opportunity, using forward pressure and a high volume of strikes in the first two rounds. After losing his mouthpiece, Bisping motioned to referee Herb Dean to pause the bout, at which point ‘The Spider’ landed a flying knee, delivering a near flash knockout to the UK representative as the third round ended.

Following some brief controversy as to whether or not the bout was stopped, ‘The Count’ rallied back through the final two rounds, ultimately taking a unanimous decision in the biggest fight of his life, and it ended up getting his his late notice title shot against Rockhold, which brings us to the last – and by far the biggest – surprise of Bisping’s career. 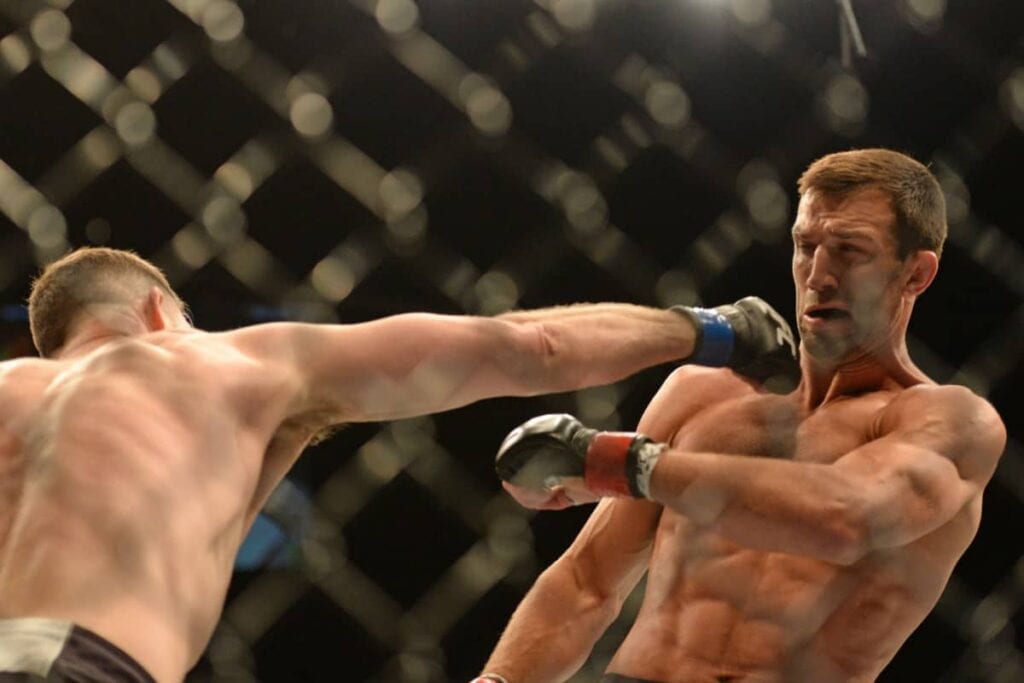 Bisping’s long and storied career in the UFC reached its pinnacle last Saturday night at UFC 199 when he captured the UFC middleweight championship by knocking out Rockhold.

The English fighter closed as more than a six-to-one underdog on most betting sites. Taking the fight on two weeks’ notice, Bisping made the most of his first UFC title shot, taking out the heavily favored Rockhold with a left hook and follow-up punches in the first frame.

With the win, Bisping became the very first fighter from the UK to capture a UFC championship belt, capping off a lengthy career full of surprises with the biggest one of all after few if any, thought he would ever win UFC gold.