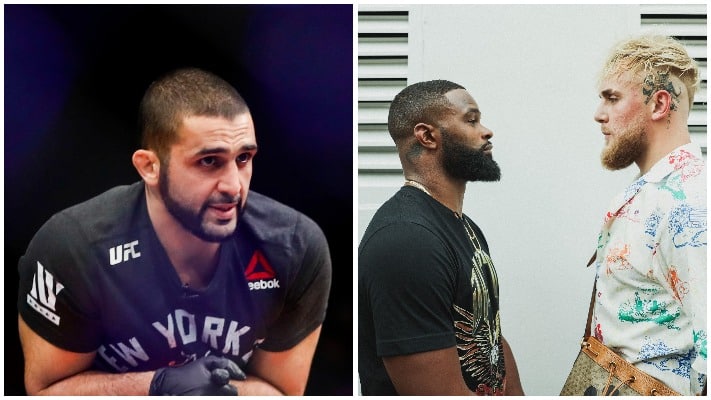 Firas Zahabi thinks Tyron Woodley has a tough task ahead of him when he squares off against Jake Paul on August 29, partially due to the fact the YouTuber will “definitely” be using performance-enhancing drugs.

“This is a very tough fight for Tyron,” Zahabi said on a recent AMA session. “Why would Tyron Woodley possibly lose this fight? One, the guy he’s fighting is bigger, and he’s a big puncher.”

“(Woodley) doesn’t want to take that risk, even though he has that skill,” Zahabi added “He executes in sparring, but he’s a little bit gunshy (in actual fights).

“Two things are gonna happen, either (Jake Paul) is going to move ahead on the scorecards against Woodley, or he’s gonna get knocked out by a counter right. I doubt Woodley knocks him out with any other punch.

“He knocks out a young, overly excited Jake Paul, who’s overly confident, walks into his right hand and gets laid out. Is that a possibility? Absolutely. However, I do feel that Jake Paul holds the same weapon. He’s got a devastating, devastating right hand, except Jake Paul is going to be more active, with the same right hand.

“Either guy can get knocked out with a right hand, but Jake Paul is bigger, explosive, very athletic,” Zahabi said. “Because he’s bigger, he could push around, he could bully a Tyron Woodley a little bit.”

Zahabi went on to express his belief that Paul will be using PEDs and Woodely will not on August 29.

“I didn’t want to mention it, but my number one factor — Jake Paul’s corner, they’re going to be on all sorts of substances,” Zahabi said. “I don’t think they test. Maybe the week of the fight, (but) there’s no USADA. I didn’t want to say, but I think that’s a major factor. When I say he’s bigger and stronger and he’s more athletic, I think he’s basically on PEDs.

Do you think Firas Zahabi is right? Will Jake Paul be using PEDs ahead of his fight with Tyron Woodley?