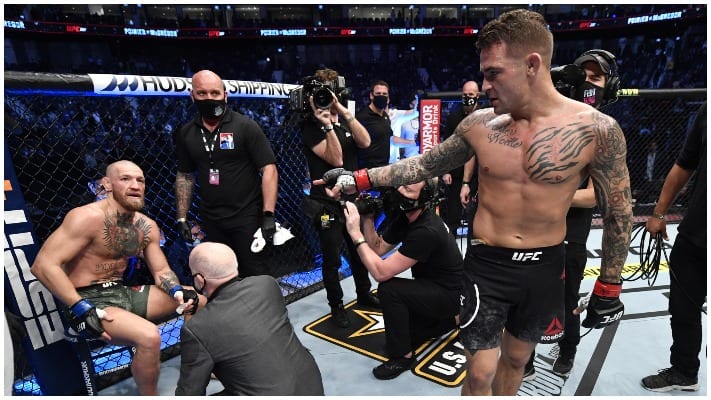 McGregor suffered a second-round knockout defeat at the hands of Poirier in the UFC 257 headliner this past weekend.

In what was one of the most shocking moments in the sport, many observers heaped praise on Poirier for his improvement since the first fight as well as his overall game plan.

However, Zahabi believes McGregor could have survived the onslaught of Poirier — had he not given up.

“In the second round, when McGregor was getting hit along the fence. I found it strange that he wasn’t — it seemed like he had already gave up on the fight,” Zahabi said on his YouTube channel (via Bloody Elbow). “Before he hit the canvas, I felt like he had given up on the fight, because things were getting tough.

“The fight was getting tough. His left hand didn’t work, and he’s not used to that. He’s not used to hitting guys with the big left, and then (they) keep fighting. McGregor, in the second round, dropped his best card. He landed that perfect left hand, the one he’s relied on his entire career. But for one reason or another, it didn’t work.

“Poirier did not go down, and it seemed that McGregor got emotional about it. He started covering up, he was getting hit, but it didn’t look like he was trying to circle out and survive. He looked like a guy who was like ‘this is the end, I better do something.’ He threw a few punches, but they were like — almost desperate.

“He seemed to get emotional. I looked at his face and he was very very emotional. Whereas if you contrast that with Poirier, when Poirier got hit… he was cool and looking for his next move.”

While Zahabi still believes McGregor is superior to Poirier in a number of areas, the Irishman ultimately lacks the heart of the latter. That means he is unable to weather storms like Poirier.

“I gave McGregor so many pluses,” Zahabi added. “I told you guys he’s a better boxer, he’s a better counterpuncher, he has better reach, and he’s faced Mayweather in boxing. He has so many advantages, but one thing I said, Poirier has the biggest heart. You can’t deny that.

“We saw the will to win overcome skill and technique. McGregor has beautiful skill and technique, punching mechanics. Even towards to the end, his head movement was excellent. In my opinion, he’s not used to weathering storms. All the hard fights Poirier had, they all led him to this win last weekend. All those hard fights, those blood and guts fights he’s had, they’ve toughened him up mentally. The barrage of punches he was taking would’ve put a lesser seasoned fighter out.

“If you look at McGregor. The punches he took at the end of the fight, that would not have put Poirier out. If you disagree, please look at the Poirier-Hooker fight. You can see that what happened to McGregor at the end of the fight, was happening all for 15 minutes between Poirier and Dan Hooker. When McGregor gets into a heated battle, it seems like he folds. It seems like he will fold faster than Poirier by far.”

Do you agree with Zahabi?