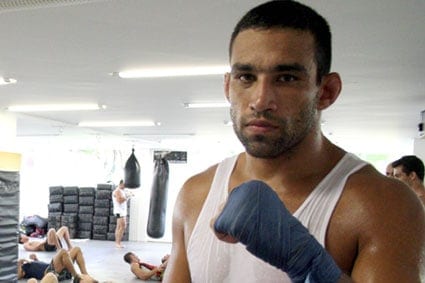 Werdum ate some big shots from Hunt during the fight, including two that dropped him to the ground. But he was able to recover and deliver the decisive blow, a technique that no doubt came from his longtime striking coach, decorated Muay Thai champion Rafael Cordeiro.

The finish was all the more impressive given Hunt’s legendary chin, and although Werdum sealed the deal with a barrage of punches, “Vai Cavalo” spoke up in a UFC interview to state that they were not needed. According to Werdum, Hunt verbally submitted when the knee hit him on the chin:

When we stood up, I tried twice to take him down and he defended very well. I trained a lot for this, I asked my master Rafael Cordeiro and he allowed me to use my double leg as a set up. Hunt knew that I would try to take him down, it was obvious. So I did the set up downstairs and then I hit him with a knee in his chin.

It was hard because he is very intelligent, he knows how to move at the octagon and he’s smart. I was able to hit him with the knee and after that happened a thing that no-one saw was that he asked the referee for the end of the bout. When he was knocked down he said that it was enough and the referee didn’t listen, so I had to hit him a few times more.”

Not something that we’d expect to hear about a warrior like Hunt, but  “The Super Samoan” can probably be given a pass after he lost 37 pounds to take the fight on short notice in Mexico City’s altitude.

As for Werdum, he’ll move on to a bout with his originally scheduled UFC 180 main event opponent, heavyweight champion Cain Velasquez; that is, if he can return from his long injury hiatus by March.

Most are predicting Velasquez to keep his belt when the two champions do in fact throw down, but Werdum has made a career out of winning as the underdog.

With impeccable striking technique and now newfound power, don’t be surprised to possibly see “Vai Cavalo” emerge with the unified belt sometime in 2015.