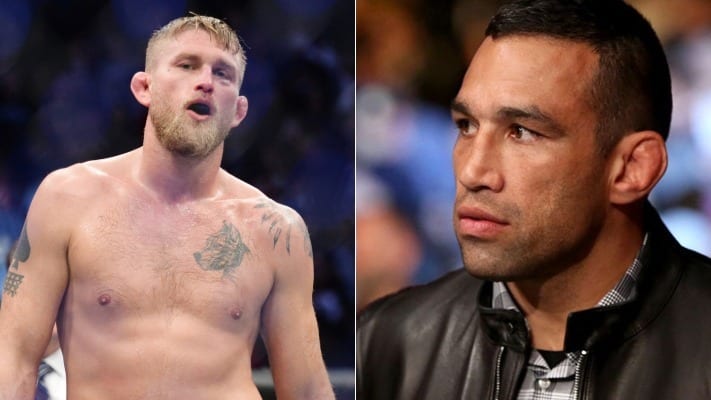 There may be some bad blood going into the Fabricio Werdum vs. Alexander Gustafsson fight on July 25.

It won’t be the first time they have locked horns either, as Gustafsson recently revealed they had an intense sparring session back in the day which the Swede claimed to have won. “The Mauler” added it was intense as Werdum came with knees to the head but claimed he enjoyed it looking back.

While Werdum confirmed he used his knees on Gustafsson, by his account, the latter was not pleased at all. Neither was himself for that matter given how the sparring went down.

“It happened around eight years ago when I went to train wrestling at Mark Munoz’s academy,” Werdum told Sherdog. “When I arrived there, Travis Browne and Gustafsson were doing an MMA sparring session coordinated by his trainer, who invited me to join them. I imagined the trainer would do some kind of rotation sparring, but he put me in the middle with both coming in sequence.

“Of course it was not fair. First I did it with Browne, later with Gustafsson and again with Browne and again with Gustafsson. In that second sparring session, Gustafsson opened a cut on my nose, then I grabbed his neck in a Thai clinch and hit a knee in his face, which opened a big cut. I imagine he got around five stitches in there. Of course, Gustafsson and his trainer got angry with me, said a couple of bad words and the sparring didn’t finish in a good atmosphere.

“I don’t have a problem talking about tactics. Gustafsson knows I want to take him down and that’s no secret. And I’ll take him down and submit him. I live on the same street as Lyoto Machida, and he is helping me a lot concerning approach and distance for this fight.”

As Gustafsson looks to kick off his heavyweight career with a bang, Werdum is looking to return to the win column again.

The Brazilian is on a two-fight losing streak, having most recently lost a split verdict to Aleksei Oleinik at UFC 249 in May in what was his first outing since March 2018.

The long layoff certainly contributed, but so did his training methods going into the Oleinik fight. Things, however, will be different for this fight.

“Last fight I not only felt my absence of two years away from the UFC Octagon, but also I made a totally wrong choice in training,” Werdum explained. “I went up to Big Bear Mountain, where I stayed for two months without sparring and just training via video. Definitely there is no way to train via the internet, and I felt that in my return.

“So this time I changed everything. I made a real camp with physical training, a lot of jiu-jitsu with master Rubens Cobrinha Charles, MMA with master Rafael Cordeiro, who also had me do a lot of sparring at Kings MMA. Also this time I worked my mind with Eric Faro, who was recommended by Cris Cyborg. The guy is doing a wonderful job with me concerning my focus. You will see a totally different Werdum on July 25. My self confidence is really high.”

How do you see Werdum vs. Gustafsson going?