LowKickMMA.com
Home UFC News Fabricio Werdum: I Have The Real Belt Because Velasquez Doesn’t Show Up 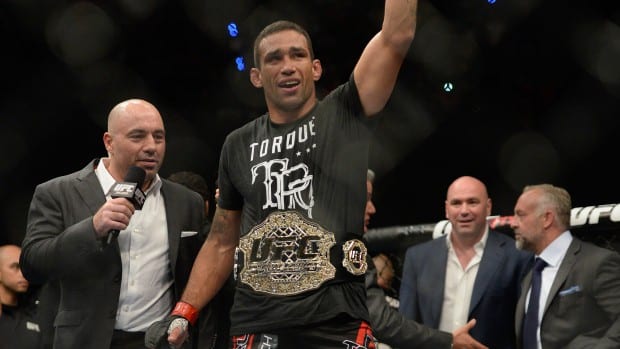 UFC heavyweight champion Cain Velasquez has understandably caught a lot of flack for not defending his belt since a dominant, brutal beating of Junior dos Santos in the main event of UFC 166 way back in October 2013.

The onus has largely fallen on his highly criticized home base of American Kickboxing Academy (AKA), but Velasquez is unrelenting in his stance of standing by his methods until the dire end. Right or wrong, Velasquez saw a high-profile fight with Fabricio Werdum at last November’s UFC 180 fall apart, and ‘Vai Cavalo’ capitalized by winning the interim strap with a jaw-dropping flying knee on Mark Hunt.

Heading into their scheduled rematch at June 13’s UFC 188 from Mexico City, Werdum hasn’t been all that vocal of a critic of Velasquez; that is, until now. The decorated Brazilian Jiu-jitsu wiz met up with FOX Sports to take a few jabs at the dominant but oft-injured champion:

According to Werdum, with Velasquez on the sidelines for such an extended period of time, his interim title has now become the real heavyweight championship:

In reality Werdum has fought two times since Velasquez last did, defeating Travis Browne at UFC on FOX 11 in April 2014 before winning the interim belt against Hunt. ‘Vai Cavalo’ isn’t sure what belt Velasquez is carrying around, and he believes his recent wins are enough for him to take over as the true champion:

“I don’t know Cain Velasquez, I know this is my belt. I don’t know because he don’t have a fight for two years. He try to keep my belt; this is the real one.”

Unfortunately for Werdum, however, Velasquez is still the one official champ. The only thing he can do to change that is beat him in Mexico in just over one month’s time, and not surprisingly, ‘Vai Cavalo’ envisions a special title victory to unify the belts:

“I feel for sure it’s special moment. I have my belt, he have a belt, and just June 13 I show for everybody who is the real champion.”