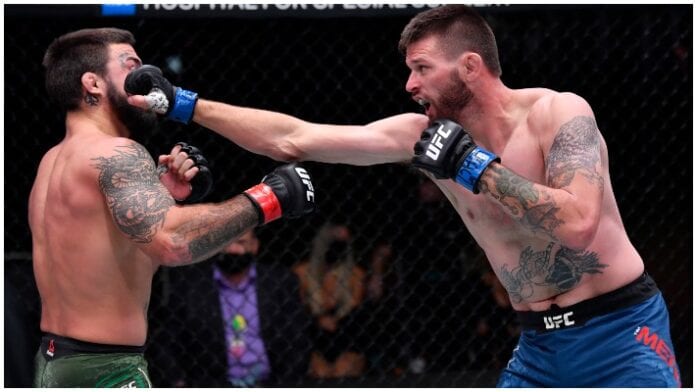 ‘Dirty Bird’ has put back-to-back wins together for the first time since 2016 by beating Mike Perry and Laureano Staropoli in consecutive fights.

On the undercard of Chan Sung Jung vs. Dan Ige, Means hopes to make it three in a row when he faces the always exciting Englishman, Danny Roberts.

In an interview with LowKickMMA, Means gave props to his next opponent but says Roberts will be finished violently later this month.

“Good left-hander, you know, good boxer. He has a ton of heart,” means said. “He’s not a guy that’s gonna quit. I know he’s a guy that’s going to come look for me and make it a fight. I think the fans are in for a real treat with the way our styles clash and like always we’re gonna meet in the middle and figure that out.

“Nothing but respect to the UK guys and Danny and those guys over there but, I have to make a statement out of Danny,” Means added. “All due respect but I’ve got to finish Danny violently.”

The 37-year-old is predicting his fight with Roberts will be a fun one for as long as it lasts.

“It’ll be a barn burner,” Means said. “It’s going to be a back-and-forth affair. You always go in wanting to get your hand raised or whatever. Our skill sets are a lot of the same. It’s just going to be who’s going to get to who first.”

Do you think Tim Means will make it three wins in a row by beating Danny Roberts at UFC Vegas 29?