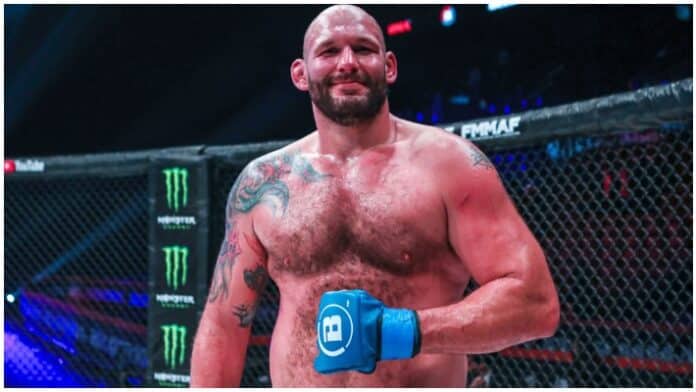 Tim Johnson admits securing a fight with Fedor Emelianenko at Bellator 269 feels like winning the lottery.

‘The Last Emperor’ announced in June that he will take his retirement tour to Moscow, Russia on October 23. At the time it was unclear who Emelianenko would fight. Junior dos Santos, Alistair Overeem, Fabricio Werdum, and Jake Hager, all volunteered themselves before the heavyweight legend opted to face Johnson instead.

Johnson has been on something of a roll as of late. The 36-year-old picked up high-profile wins over Tyrell Fortune, Matt Mitrione, and Cheick Kongo to secure a shot at the interim heavyweight title. However, he didn’t seem to be in the running for a fight Emelianenko after falling to a defeat against his protégé, Valentin Moldavsky, last time out.

During a recent interview with LowKickMMA, Johnson admitted he didn’t think he would be chosen as Emelianenko’s opponent and says he felt like he had “won the lottery” after receiving the call to face the heavyweight GOAT.

“Right after my Moldavsky fight, I was in the back getting my eye looked at,” Johnson said. “You know, I was on the phone right away with my agent and told him ‘Well, this fight didn’t go my way, just drop my name in the hat for Fedor’. He had just kind of came out (announced his comeback), no opponents yet.

“As time was going on I didn’t know if I had the name-power to get the fight,” Johnson continued. “So, I was trying to look at other avenues and Brian called me like ‘Hey, you got the fight. He picked you’. (I feel like I’ve) won the lottery and you know, I can’t wait.”

On fight night, Johnson is expecting a tentative opening round before both men let their fists fly in round two.

“I think realistically if it’s going to be a finish it will probably be a second-round finish,” Johnson said. “You know, I think both of us will be testing the waters and understand that first-round heavyweight power, you’ve got to let that battery drain a little bit.”

Do you think Tim Johnson will get the win against Fedor Emelianenko at Bellator 269?