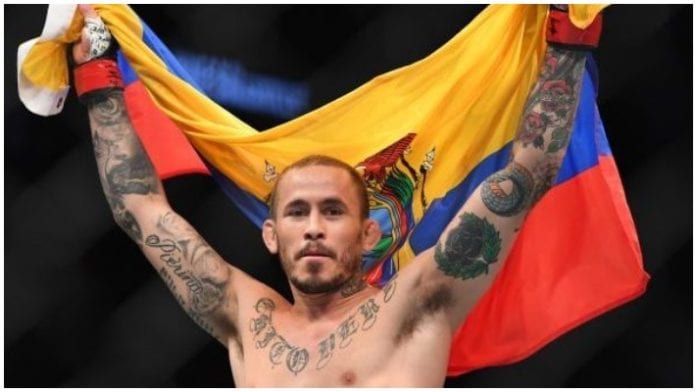 Bantamweight contender Marlon Vera supports former featherweight king Jose Aldo getting a title shot despite the fact he lost against Marlon Moraes in his divisional debut. ‘Scarface’ was on the end of a controversial decision loss against his compatriot, something UFC president Dana White and the now-retired former champion Henry Cejudo disagreed with. He was supposed to meet Cejudo for the bantamweight belt at UFC 250 but the ongoing global pandemic ended all hopes of that and Aldo is now expected to face Petr Yan for the title later this summer.

Speaking exclusively to LowKickMMA, ”Chito’ expressed his support for Aldo getting a title shot on the back of a defeat as he is hoping for a similarly big fight despite the fact he suffered a controversial loss to Song Yadong a couple of weeks back.

“Being real about it Petr Yan deserves it (a title shot). (Jose) Aldo, even if he got robbed, I got robbed – we lose at the end of the day,” Vera said. “If they are going to serve us as winners after we lost I’m going to support that because I wanna get that too. Realistically I thought the fight was (Aljamain) Sterling and Petr Yan. I think was the real title fight but, we know how the game goes it’s not about who deserves it, it’s about who sells. No offence to Sterling but how many people really watch him fight? On the other side Cory Sandhagen he’s really good but you guys have no name. I’m not saying that’s what I want – I don’t want to become a clown but (its) what the UFC and the fans want. They don’t want see sometimes the most skilled fight, they want to see (the fight) that puts on the better show.

‘Chito’ understands the UFC want to put on the biggest fights rather than the most skilled or deserving. Without former bantamweight champion TJ Dillashaw in the picture he accepts Aldo vs. Yan is the biggest fight that can be made right now, he said.

“In that division right now TJ (Dillashaw) was the big name but he hasn’t come back yet. Besides TJ I don’t think there’s anybody with a big name. Aldo is have a big name. Yan, he doesn’t speak English but the way he fights is pretty good so he put on a show all the time…I think that’s why the Petr Yan, Jose Aldo fight makes sense because they need to sell it.”

Do you agree with Marlon Vera? Is Jose Aldo a worthy title challenger at bantamweight?