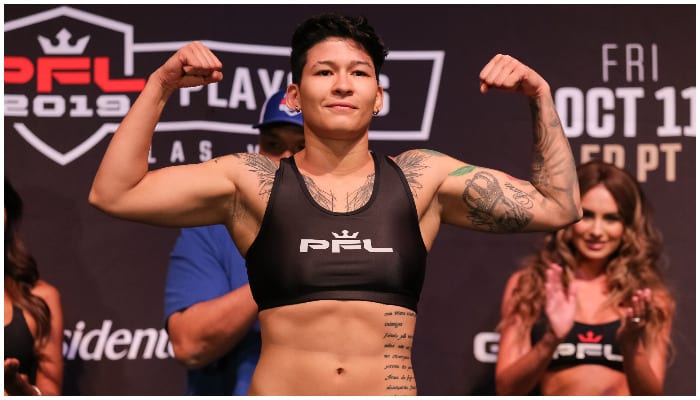 Larissa Pacheco is one victory away from collecting a million dollars. It doesn’t matter how she wins. All that matters is that her hand gets raised on the 31 December, at the PFL 2019 Championship. Do that, and life will never be the same for the 25-year-old Brazilian.

All this is easier said than done, of course. Standing opposite Pacheco will be two-time Olympic judo gold medalist Kayla Harrison. The 29-year-old Harrison has yet to taste defeat inside the cage and is considered by many as the PFL’s women’s lightweight champion-in-waiting.

This bout will be the second time these two fighters have squared off. Harrison drew first-blood back in May after defeating Pacheco via unanimous decision. Still, the Brazilian took that contest on short notice, and despite a condensed training camp, managed to go the distance with the Ohio-native, a feat no other fighter has accomplished.

However, the stakes are much higher this time around, and after coming off second-best in their previous encounter, Pacheco is determined to leave the cage on New Year’s Eve with more than just well-meaning plaudits.

“It inspires me more, knowing the prize is so large. But all fights are important. The prize is an added benefit. But for me – I fight for my job, my career, and my life is the fight.”

Pacheco began competing as a mixed martial artist in 2012 and soon made a name for herself on Brazil’s local scene. In 2014, at the age of 19, she became the youngest fighter to sign with the UFC but found the leap to the sport’s premier promotion a bridge too far. Two straight losses to Jessica Andrade and Germaine de Randamie saw Pacheco and the UFC part ways.

To make matters worse, during her bout with de Randamie, Pacheco broke her arm early in the contest. The fact that she continued to fight, with the damaged limb, exacerbated the injury, leading to the Belen native to undergo two surgeries, followed by a three-year recovery period.

After four years in the wilderness, Pacheco got her chance to return to MMA’s bright lights when the PFL matchmakers came calling. One of the benefits of signing with the PFL was that Pacheco was allowed to compete in a weight class suited to her natural frame.

“I feel it’s very important what PFL are doing with the women’s divisions. It has provided a brilliant opportunity for heavier women to gain visibility and acknowledgement in MMA. I hope new events will promote heavier women athletes so we can continue to grow the division.”

The company needed a short notice opponent for Harrison, and Pacheco fit the bill. She was experienced, the right weight, and was prepared to face one of the rising stars of women’s MMA. Pacheco lost that bout, but has still gone on to make her way to this year’s PFL finals.

She did so after defeating the tournament’s No.1 seed Sarah Kaufman in their semifinal clash. It was an impressive performance, but Pacheco did not have too long to rest on her laurels. Moments after Pacheco’s victory, Harrison booked her finals spot with an opening-round submission of Bobbi Jo Dalziel.

“It was very important to beat her [Kaufman]. She is a great athlete with a good reputation in the USA. But we immediately started focusing on the final. I celebrated the win by eating a pizza and going to bed after the fight!

Pacheco knows how good Harrison is, and will be expecting the American to have improved since their last encounter. However, she is confident with the benefit of a full camp behind her, Tuesday’s rematch will not simply be a repeat of their first clash.

“Fans can expect me to be far more prepared for this fight. I’m in a great place mentally and physically. We learned a lot from the first bout. It’s going to be an exciting fight,’ Pacheco said.

Over the past 12 months, plenty of upsets and surprises have taken place across the MMA world. The question leading up to Tuesday’s fight is, can Pacheco, add her name to the list of fighters who upset the odds in 2019? If she does, she will walk away with fame, glory, and a far healthier bank balance.