LowKickMMA.com
Home Interviews EXCLUSIVE | Jan Blachowicz Will Move To Heavyweight In ‘2 Or 3... 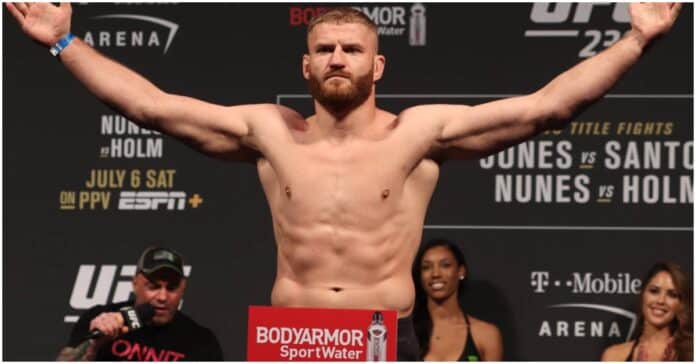 The light-heavyweight champion, who is due to defend his title against Glover Teixeira later this month, has had his say on a potential move up in weight during a recent interview with James Lynch of LowKickMMA.

“In maybe 2 or 3, yeah 2-3 more fights I’d move to heavyweight for sure,” Blachowicz said. “This is a big plan for the future for me. I’m getting old and cutting weight is not easy for me, and I like to eat. It’s just something I want to do and try myself out at Heavyweight.”

Blachowicz is looking to make the jump to heavyweight after a few more title defenses in the light heavyweight division. His last defense was against Israel Adesanya who he defeated by unanimous decision back at UFC 259. The Polish puncher is currently on a 5 fight win streak. He looks to stretch his win streak to 6 when he takes on Glover Teixeira at UFC 267 on October 30.

The move to heavyweight would be a significant step up and would also bring on what many would consider much tougher challenges. Blachowicz would be looking to face Francis Ngannu or Ciryl Gane in a potential “super fight”.

The UFC has seen many champions move up in weight in hopes to become multi-time champions, in recent years more than ever. Israel Adesanya made the move and it did not work out as well as he thought it may have.

We have also seen fighters make it work like “Triple C” Henry Cejudo and Amanda Nunes. The difference in weight for some when moving up is too much. Blachowicz’s legendary power could prove to be even more dangerous in the heavyweight division than the light heavyweight.

Do you think it is smart for Jan Blachowicz to move up to the heavyweight division?