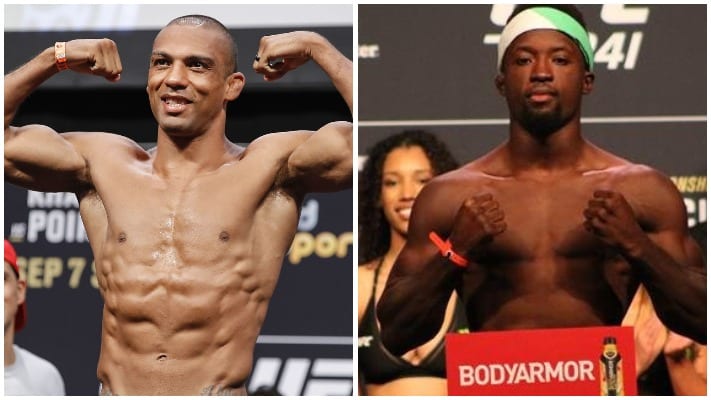 It’s looking like Edson Barboza has a new opponent for his second fight at featherweight. The Brazilian was previously expected to face Jeremy Stephens on October 3 but will now fight Sodiq Yussuf instead on October 10.

Brazilian publication Combate reported earlier this month that the UFC was working on a fight between Barboza and Stephens which would feature on the October 3 card set to be headlined by Holly Holm vs. Irene Aldana.

According to a new report from Combate Stephens turned down the fight as he didn’t believe he had enough to time make the 145lb limit safely. So the UFC has found an alternative opponent in Yussuf and the pair will face off on the October 10 card which is expected to be headlined by a bantamweight bout between top contenders Marlon Moraes and Cody Sandhagen.

Long-time lightweight contender Barboza made the surprise drop down to featherweight after suffering back-to-back defeats against Paul Felder and Justin Gaethje. Barboza again fell short in his 145lb debut against Dan Ige but many believe he was on the wrong side of a bad decision from the judges in that fight. He remains a serious contender despite his poor run of form. Barboza holds several high-profile lightweight wins over the likes of Dan Hooker and Anthony Pettis. He will now look to get his first win at a new weight.

Yusuff is one of the fastest rising stars at featherweight since breaking into the UFC following an impressive performance on the second season of Dana White’s Contender Series. Yusuff has a perfect during his time with the UFC picking up wins over Andre Fili, Gabriel Benitez, Sheymon Moraes, and Suman Mokhtarian. He is currently ranked #11 in the division and will now get the chance to claim the biggest win of his young career.  While Yusuff may not be as big of a name as Stephens, he could arguably prove to be a tougher opponent for Barboza.

Who will win on October 10? Edson Barboza or Sodiq Yussuf?