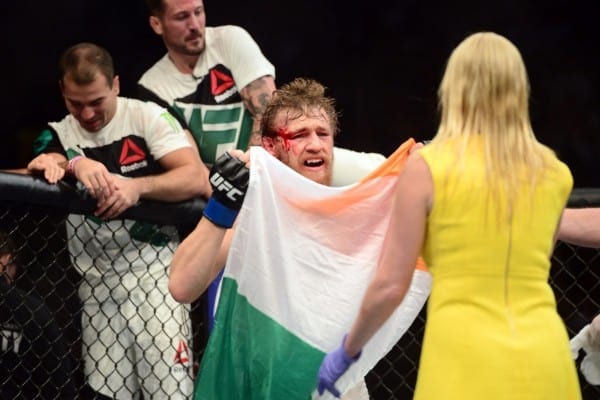 When Conor McGregor knocked out former champion Jose Aldo in a record-setting 13 seconds in the main event of last Saturday’s UFC 194 from Las Vegas, the possibility of ‘The Notorious’ moving up to lightweight for an immediate title shot against the winner of tis weekend’s Rafael dos Anjos vs. Donald Cerrone title fight at UFC on FOX 17 arrived as quite possibly the biggest fight the ultra-popular Irishman could move on to next.

That understandably made top-ranked featherweight Frankie Edgar and his team mad, as they were supposedly ‘promised’ and ‘couldn’t be denied’ a title shot after Edgar knocked out Chad Mendes in the main event of last Friday’s TUF 22 Finale.

Yet it could be a distinct possibility, as McGregor’s head coach John Kavanagh said that the new 145-pound champion could fight for the 155-pound belt in March and then defend the featherweight strap against Edgar at July’s UFC 200. A short time after those words were said Edgar’s coach Mark Henry spoke up to MMA Fighting to strongly insinuate McGregor was running from Edgar:

“Bro, why is his boy running so bad?” Henry asked. “Now, he has [had] two chances to fight Frankie. First was when Aldo got hurt [before UFC 189] and the UFC asked Chad [Mendes] ‘Have you been training?’ and he said no, he’s been doing a hunting show.

“They asked Frankie, and he said, ‘I train all year, yeah, I’m ready.’ He picks Mendes.”

Henry made a strong point in pointing out that Edgar knocked out Mendes with ease, and ‘Money’ was largely manhandling McGregor at UFC 189 until gassing late on short notice. According to his opinion, Edgar simply has way more heart than McGregor:

“Now Frankie finishes the same guy [Mendes] he [McGregor] had on 10-day notice that spanked him until he got tired, and Frankie does his part,” Henry said. “This fight comes down to both, when they were in beginning of their career, when both [were] in a kneebar, Frankie says, ‘Break it off,’ and he [McGregor] taps before the guy has a good grip. They’re not even made [from] close to the same heart.”

While it can hardly be argued that McGregor vs. Cerrone or dos Anjos wouldn’t be a hugely popular fight, Henry made another strong argument for an Edgar title shot by stating no one has ever jumped up weight classes or a title shot in UFC history, especially given that McGregor hasn’t even defended his belt:

“No one has ever been able to jump up in weight class before taking care of the top five, and this guy doesn’t even have one defense,” Henry said. “The guy says he would fight Frankie if Frankie took care of business. Well, he did, so he should be a man of his word and stop being so scared. He’s the one that’s been scared for so many years cutting down from 180, 175 to fight guys with less range, weight and height, while Frankie was 152 fighting 155.

“So now you have the belt-man up and defend it. Like they said in Braveheart, ‘Don’t tuck tail and run.'”